The formal donation of the Peeples Historical Collection of documents, maps and other memorabilia on Punta Gorda, Charlotte Harbor and Florida was formalized today at the Punta Gorda Woman's Club in a ceremony marked with a champagne toast to the Peeples by a large gathering of Punta Gorda leadership and citizens interested in the preservation of archival material on the town.

Peeples Collection to be Gifted to the Punta Gorda History Center, Inc. This Thursday

There is a story here.  A story of pioneers . ..  a story of Spanish Explorers … a story of Seminole Indians … a story of tourists and winter visitors, warm-weather bound, first coming here by train and steamboat later in autos often tugging RVs, a story of people making a life here as merchants, doctors, farmers,  ranchers, land sellers, hoteliers, fishermen, teachers, and more.   It is our story… an often raucous, complicated, sometimes tragic, frequently joyful story of our town – a story of Punta Gorda.


That story is in pieces – pieces of information, remnants, artifacts, photos, old maps, books, diaries, registers, film clips, articles in old magazines.  With each piece saved, each piece preserved, a part of the puzzle of Punta Gorda’s past is available for future historians, students, genealogists, new residents or visitors, and all those interested in what happened here to put together to discover what and who was here and what might be.  For instance, when Urban Planner Jaime Correa laid out new plans, a master plan, for Punta Gorda after Hurricane Charley, he looked to the City’s past. What were its buildings like, what worked here, what did not.   It helped him, Team Punta Gorda, and other Punta Gorda citizens develop a vision for the City’s future… the City that we have seen unfold before our eyes over the last 10 years.
Where did Mr. Correa  go for that history  He  went to our resident historian,  Vernon Peeples .  His staff talked to Mr. Peeples and went through his collection of books, articles, photos to get a better understanding of that past.  Where do reporters and other writers go when they need a story or background information about Punta Gorda’s past.  They go to Vernon Peeples collection and notes and Mr. Peeples’ incredible memory of things that were.  Where do students and other researchers and everyone who wants to know something about Punta Gorda’s history go?  They go to Vernon and his amazing collection.


Vernon Peeples is now 80 some years old, and almost two years ago he approached Team Punta Gorda about the archive he had created, asking for help in finding a secure location to maintain and keep the collection for prosperity.   He was also aware that there are many smaller collections scattered throughout Punta Gorda and Southwest Florida and throughout the US where former residents took them.    His request prompted the formation of the Punta Gorda History Center, a group of citizens who started working together to develop a Center in Punta Gorda that would house and maintain Mr. Peeples collection and other pieces of the Punta Gorda puzzle.   During the past year or so a 5013C corporation was founded, a strategic plan was developed,  possible locations for such a collection were identified,  and initial work on documenting the contents of the collection was begun.
This Thursday a major step towards the formation of a Center will take place with the formal signing of a gifting agreement by Vernon and Edna Jane Peeples to the Punta Gorda History Center, Inc. of the extension collection on Punta Gorda's past.
at 3:32 PM 0 comments

Email ThisBlogThis!Share to TwitterShare to FacebookShare to Pinterest
Labels: News 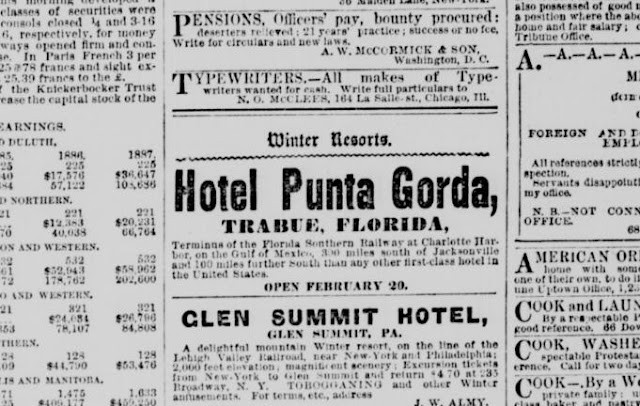 In researching the founding of Punta Gorda this week, we found an ad in the February 6, 1887 issue of the New York Tribune for a new hotel in Florida under label Winter Resorts.  The Hotel Punta Gorda was described as being 100 miles further South than any other First Class hotel in the United States.  Before the town of Punta Gorda was officially born (it was still Trabue at the time), it was being marketed as a tourist destination.

Why we wondered was the Hotel --- the Hotel Punta Gorda before the City was even named officially Punta Gorda in December of that year.  Vernon Peeples, our resident historian explains why.

Vernon Peeples and Gene Murtha, President of the Punta Gorda History Center, were interviewed by Gordon Bower for a story in the Punta Gorda Herald which appeared in today's paper. Here in Gordon's photo they hold up one of Mr. Peeple's many antiquarian maps. Part of his book collection can be seen in the background
at 5:55 AM 1 comments 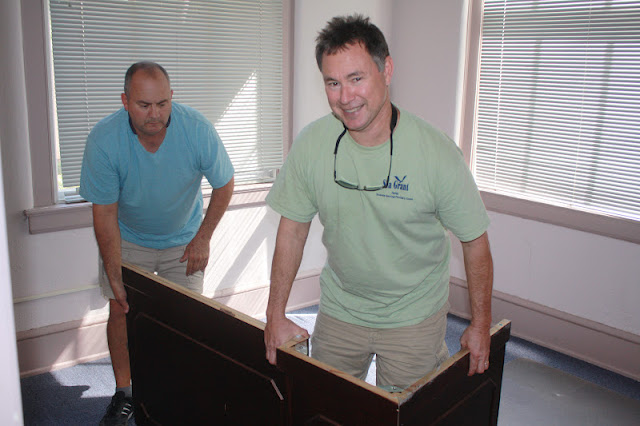 The Punta Gorda History Center just moved into offices in City Hall where the old Main Street offices were.  The City Council graciously agreed to allow us to use the space at the last Council meeting.  John Chalifoux and  Scot Shively moving in the furniture.
at 5:58 PM 0 comments