The Punta Gorda waterfront from its earliest days was seen as a draw for tourists and snowbirds. Not surprisingly,  it became the site of the original hotel.  Once the railroad was convinced to bring its trains into Isaac Trabue's new town, the Florida Southern realized it needed a hotel to draw northerns customers to use the line.  Before the first house was built on Marion Avenue, J.B. Williams of Patlatka was contracted to build the Hotel Punta Gorda. Luxurious for the time, the hotel was a three-storied structure with towers that extended higher. Advertisements for the resort proclaimed that the hotel had gas, electric bells, steam heat and open fire places.

Opened in early 1887 for the winter season, the management brought staff from resorts in Maine to operate the new hotel.  Initially a success, over the course of time the Hotel Punta Gorda had its ups and downs.  Promoting its stunning location on Charlotte Harbor, tropical ambiance, warm weather and first-class facilities, the hotel  initially appealed to wealthy yachtsmen and fishermen.  Some of its early guests included W.K. Vandervilt, John Wannamaker and Andrew Mellon.  However, over time, it lost its appeal as other newer Florida resorts competed with the Punta Gorda hotel with their beaches and more attractive amenties.


In the 1920s envisioning a new automobile-drive market for hotel rooms from the Tamiami Trail he had  just bankrolled, Barron Collier with Cornelius Vanderbilt acquired control of the Hotel Punta Gorda and remodeled and enlarged the facility.  It was reopened in 1927 with  a more Italianate style with a new tower and fifth floor ballroom as the Hotel Charlotte Harbor.  Guests to the new resort included Dan Beard (Commissioner of the Boy Scouts), Jimmie Walker, Clarence Darrow and many  sports legends of the time, like Bill Tilden.  This facility also had its ups and downs and late in its life was changed to a hotel/spa called the Charlotte Harbor Spa.  Then in August of 1959, it was destroyed in a fire, suspected of being arson.

In the 1960s as the Punta Gorda Shopping Mall was being developed on the site of the old hotel, Al Johns and Bud Cole of Punta Gorda Isles, Inc, bought the 1000 feet water property at the end of the mall from the developer, Wilbur Marvin, and built the Howard Johnson's Motor Lodge pictured below.  It opened in the summer of 1967 with 64 units.

Shortly thereafter,  Fred Babcock built a Holiday Inn  west of the Howard Johnsons.  The original property there had been the home of Perry and Marion McAdow in the late 1890s and was converted into a 12-room  Inn - The Bayview Lodge - in the 1940s. The Holiday Inn opened in the summer of 1968 had 102 rooms, a 200-seat dining room, a cocktail lounge, two banquet rooms and a coffee shop. (Photo below depicts it under construction.)

Today closest to the location of the original hotel the Four Points Sheraton sits nearest the harbor with the new Springhill Suites right behind it. 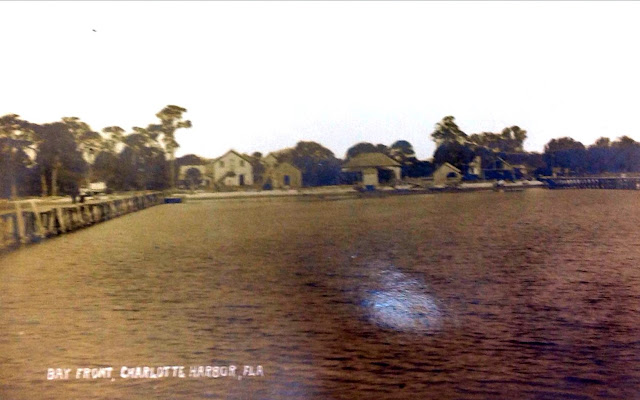 Often confused with the name of the huge bay to its South from which its own name was derived or incorrectly merged with neighboring Port Charlotte, Charlotte Harbor, the community north of the Peace River was actually the oldest settlement and town in what is now Charlotte County.   Soon through the emergence of a new development (SunSeekers’ Resort) which will comprise a major portion of Charlotte Harbor, new light will be shone on this often forgotten historic area.


Charlotte Harbor was platted in the 1860s around a point (where Live Oak Park is situated and where the two 41 bridges merge today) in an area thought to have been inhabited by indigenous peoples over 3,000 years ago.   During the Civil War, cattle were shipped to the Confederate Army from a wharf there.  After the war, the wharf continued to operate as a focus of trade with Cuba and other Caribbean islands. The old town consisted of a grid of streets developed with homes, stores, a post office, and a church.

Referred to at one point in its history as Hickory Bluff, the name Charlotte Harbor came from a post office designation – a news article from 1879 referring to the town notes “with its post office absurdly called "Charlotte Harbor.”    John Bartholf referred to the town as Hickory Bluff as late as 1882 in a pamphlet he wrote about the Charlotte Harbor area.  But for most of its history it has been known as Charlotte Harbor.  He noted in his pamphlet that the town was located amidst a ridge of pine, scrub and hammock, extending four miles along the water. At the time about twelve families lived there including the Bartholfs, the Knights, the DeCosters (Nathaniel DeCoster owned an area he called Harbor View), the Platts and the Durrances.  Many of the men in these families were Civil War veterans.

Bartholf (said to be a great grandfather of PGI developer Al Johns) promoted Hickory Bluff (Charlotte Harbor) as a resort for invalids and pleasure seekers with gorgeous sunsets and moonlight views.  He further claimed that a residence there could not be excelled by any other point in South Florida.  Surely, what the marketers of Sunseekers' Resort might say as they draw today's  potential new residents to the location that was first announced to the world over 135 years ago.