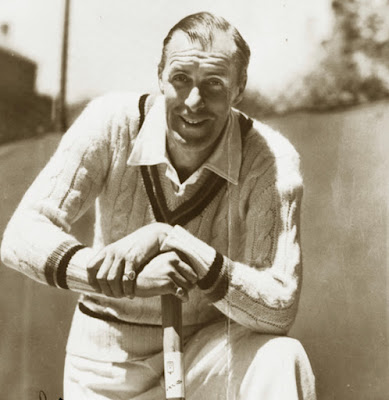 Bill Tilden,  who was the first American to win Wimbledon, capturing back-to-back championships in 1920 and 1921 over Australian Gerald Patterson and South African Brian Norton respectively, came to Punta Gorda in 1931 with great fanfare.  He was keeping a promise to Barron Collier, owner at the time of the Hotel Charlotte Harbor, who was using sports events  to attract visitors to Southwest Florida and his hotel.  Tilden had helped design the courts at Collier’s hotel.

The championship amateur known as “Big Bill” began his professional tennis years at an exhibition match at the hotel in February of 1931.  The new courts there were touted as the best in the state with grandstands to hold 600 people.  Tilden defeated Emmett Pare of Chicago, another early tennis star who toured with Tilden as a professional.  A local, S Jarvis Adams,  played in a doubles match as Tilden’s partner during the event.

One hundred years ago Punta Gorda was preparing for the Fourth of July.  The year before 6,000 had attended the Independence Day celebration in 1921 when the Charlotte Harbor Bridge was opened.

In 1922 they prepared for 10,000 attendees. Advertisements were placed

throughout the area via newspapers inviting everyone in Charlotte County, the United States and the Dominion of Canada. Dinner would be served in the park in front of the Hotel Punta Gorda. Sporting events were to include: water polo, swimming races, tub races, fancy diving,

aquaplaning and aeroplaning, baseball game and maybe a parachute jump from an aeroplane (sic).

The Charlotte Military Band would present concerts at various locations

throughout the day. A dancer in the lobby of the Hotel would conclude the day's festivities.

The City dock was damaged in the October 1921 hurricane, but the planning committee had hoped that the contractor would have it repaired in time for the fourth.  Unfortunately, it was not. The Dock wasn't finished and the watersports didn't attract the number of people as in past. There was a delay in feeding so many people, but there was food for all who were

patient.  An estimated 650 cars were parked in the central business district. An estimated 3,000 people came by private vehicles. A large number came by train the day before. The bulk of the crowd came from DeSoto, Hardies, Highland and Polk counties with Manatee & Sarasota well represented.

Memorial To Those We Lost To War 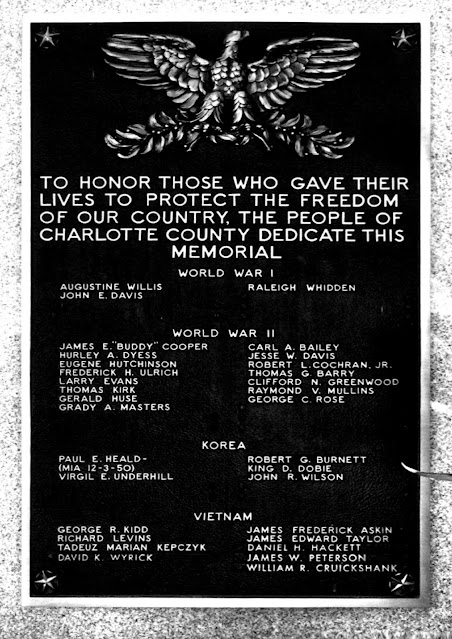 Originally called Decoration Day, Memorial Day was established in 1868 by an organization of Union veterans of the Civil War. May 30 was designated as a time for citizens to decorate the graves of the war dead with flowers By the end of the 19th century, ceremonies were being held on May 30 throughout the nation. After World War I, the day was expanded to honor all Americans who had died in wars. In 1971 Congress proclaimed Memorial Day a national holiday and declared that it be observed the last Monday in May. The memorial in the photo was at one time in Punta Gorda. Many of those listed on the plaque were from here.
at 1:14 PM 0 comments 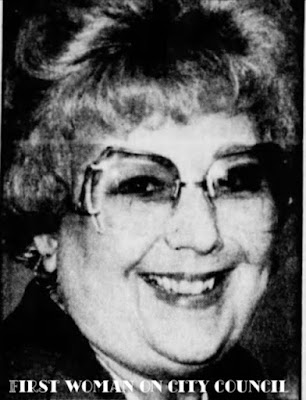 Phyllis Smith might have been born Ohio but a good part of her life was dedicated to  Punta Gorda. In 1985, she became Punta Gorda’s first City Council woman and in that role pushed for beautification of the city’s downtown. Like another Punta Gorda woman who came from another place, Marian McAdow, Phyllis wanted her adopted home to be more lush and beautiful.  Among the  many things we can thank her for is our Downtown Clock.
In her first year on the council, Phyllis  initiated a streetscape program to beautify the downtown area, which, at the time, looked like an ugly duckling. Smith told her fellow council members that the downtown area needed a facelift if they wanted to attract new business and people. The council approved the idea and left the rest up to Smith.  She formed an ad hoc committee, the Punta Gorda Revitalization Committee, on July 8, 1985. She then hit the pavement, offering to speak at every meeting that was taking place anywhere in Punta Gorda to sell her ideas. She also attended the Florida Redevelopment Association state meetings to get ideas of how other cities in Florida had revitalized their downtowns.
The committee applied to the Florida Main Street program for funding, but got turned down twice. So the city decided to bite the bullet on the first part of the downtown improvement project and put up the money for the 100 block of West Marion Avenue to be revitalized. The cost of the first streetscape in the 100 block was $190,788, and included old-fashioned lights, brick planters and flowers and improved landscaping, but it did not include money for the replica of the old town clock that Smith wanted. Smith found a company that made replicas of old clocks, but the cost was $25,000. Smith called on the community and they responded with donations. Within 10 years over 35 city blocks were revitalized under the program Phyllis initiated.
Because of  Phyllis's efforts, the city has a  CRA (Community Redevelopment Agency) which has enabled the city’s revitalization for many years. She also served on boards of the PGI Civic Association and Charlotte Regional Medical Center, was president of the Peace River Republican Women's Forum,  named Woman of the Year by the Rotary and was an elder for her church, Burnt Store Presbyterian.
at 12:11 PM 0 comments

Prisoners of War at Punta Gorda Air Base 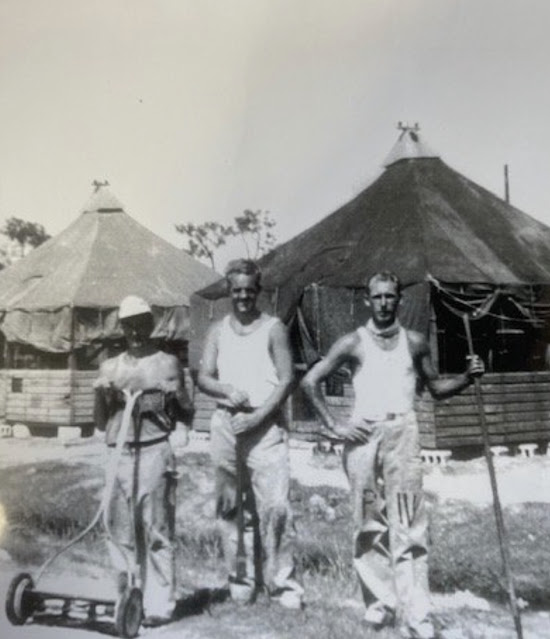 What is now Punta Gorda Airport was orginally opened as an air base during Workd War II. During that time, we know that there were German prisoners of war at the base (pictured above).

POW camps were established throughout Florida during World War II. In May 1943, Allied forces had begun shipping to the United States those captured in war. Close to 10,000 went to Florida camps, many at or near military bases. In the camps there were fights among the Germans over support for the Nazi cause. Germans captured early in the war, when the Nazis were winning, tended to be more patriotic than those taken prisoner later, when the Germans were losing. There were a few attempts at escape, but most escapees were quickly caught. At the end of the war the camps were closed. Source: 200 Quick Looks at Florida History by James C. Clark
at 8:15 PM 0 comments