Coming to the Founders Day Southern Supper - Why Not Wear a Hat? 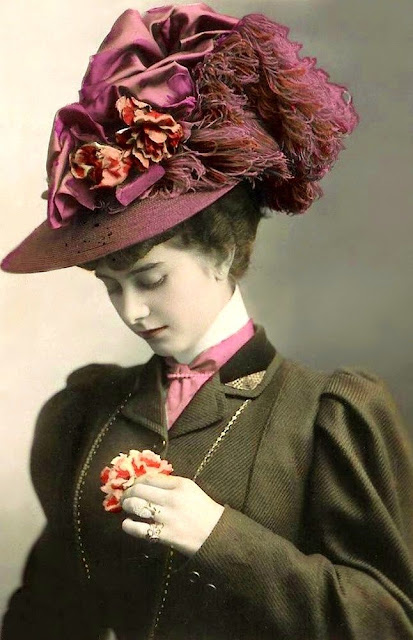 If you're coming to the Southern Supper on Saturday night, and  want to get in the mood of the early days when Punta Gorda was coming into being, you might want to create a hat from the era. All you would need is a straw or other wide brim hat  that you can adorn with some artificial flowers (there are plenty of Christmas adornments around) and add a bow or two.  Just a suggestion!  Here are some samples of hats from the era. 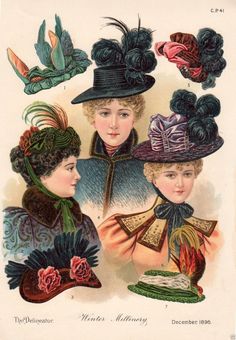 And while it was a frontier town if you look at the early pictures the women did wear fancy hats and dress was rather formal. Check out boating picture below - the men as well. 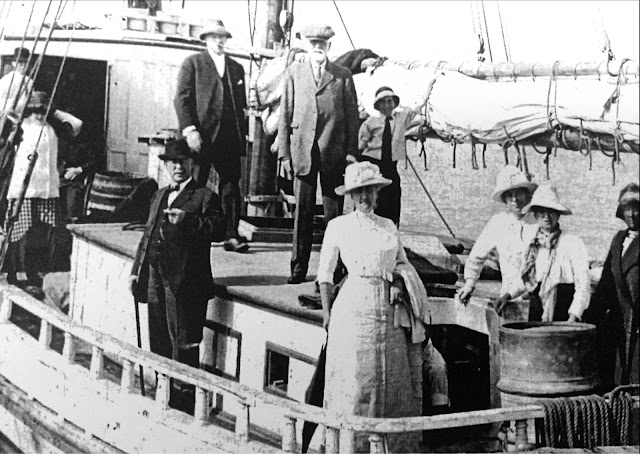 More information on event.
at 7:26 AM 0 comments 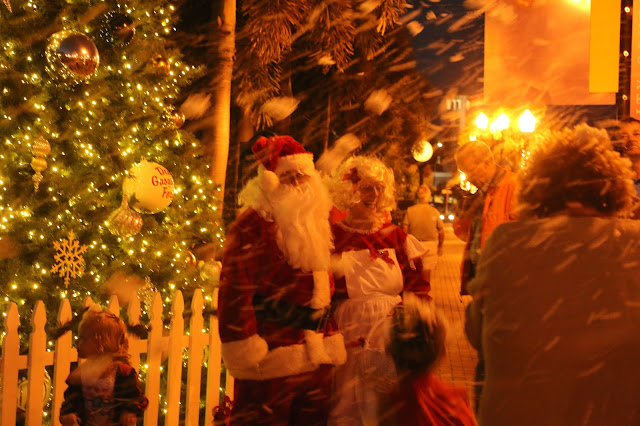 On December 4, 1988, a replica of the old clock that had once stood in front of the first National Bank, originally  the Merchant Bank of Punta Gorda, on West Marion Avenue (where Serendipity Salon and River City Grill are today) was dedicated to serve as a focal point for the City as the old clock had.  It immediately became the place for carolers, Santa Claus and Punta Gorda's Christmas celebration every December.

This year on Friday, December 4th as part of Flounders Week that tradition will be renewed around Punta Gorda's beautiful newer Christmas tree right near the clock.

With entertainment provided by Mixed Up Duo, and choirs performing including the Community Church Choir and St. Mary's Primative Baptist Choir, Punta Gorda Christmas season will kick into full gear (the Christmas parade is Saturday). Local groups will lead in informal Christmas caroling. Santa will make an appearance.  And the weather calls for intermittant snow.

See below for more infomation. 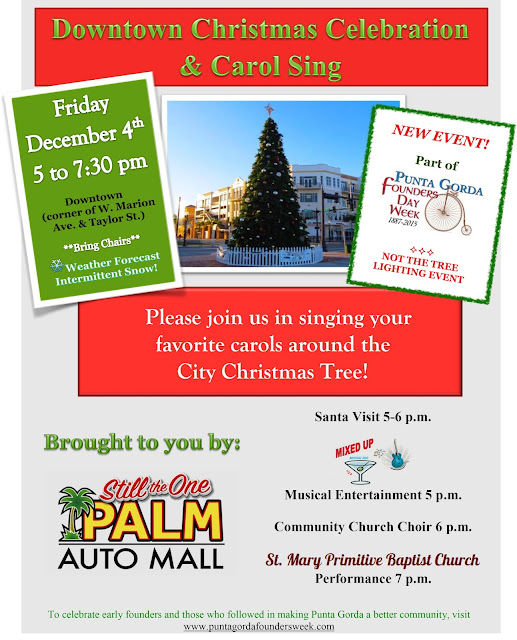 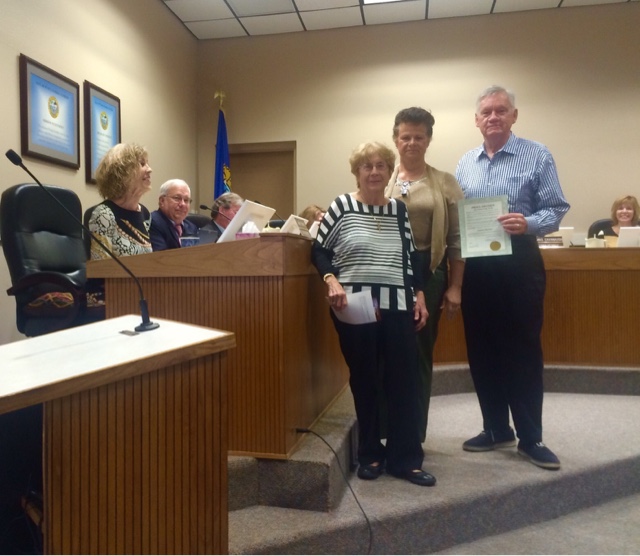 Travel Back to the 1920s and Punta Gorda's "Saved" Court House 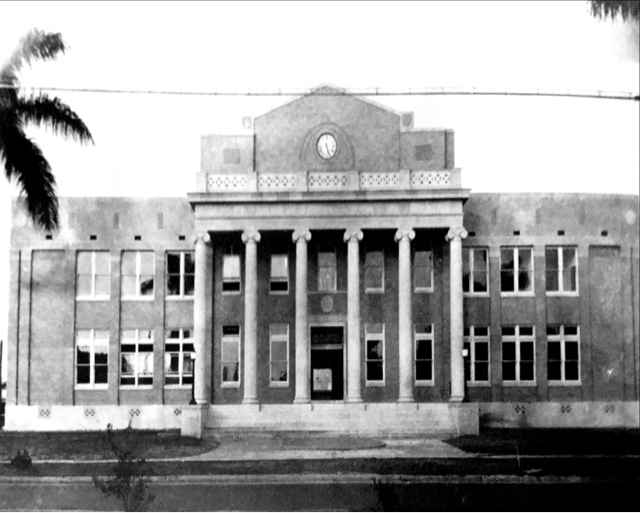 While Charlotte County became a County and Punta Gorda was voted as its county seat by an overwhelming referendum vote in 1922,  the new seat didn't have its own court house until much later.  Initially the new County rented space in the Masonic Lodge which was then at the corner of Marion Ave. and Sullivan Street.  It wasn't until 1927 that the Commission accumulated sufficient funds to start the building of  a court house.

The initial plan was for the building  to be located on the harbor.  But unable to achieve an agreement with the landowners of those lots,  on April 11, 1927, the Commission voted to purchase two lots on Taylor Street owned by George Brown, owner of Cleveland Marine Steam Way.  He sold the land to the Commission for $25,000, and plans for the new court house started.

A jail, which had living quarters and a kitchen for the jailer and his family, was added to the plan. There were 12 cells with doors operated by remote control.  A hallway led from the courtroom to the jail -- quick justice.

The building originally had separate rest room and drinking facilities for black and white citizens, which were desegregated in 1964.

The Charlotte County court house was ultimately dedicated on March 30, 1928.  A special edition of the Punta Gorda Herald celebrated its opening with ads from most of the local businesses and dignitaries congratulating the County on the grand achievement.    It was considered one of the most modern buildings in Florida at the time. 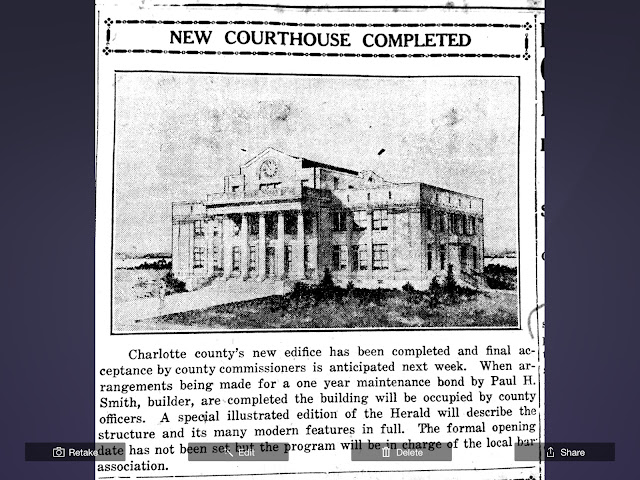 The Court House became obsolete when  the needs of the growing county outgrew it, and was falling in to disrepair when Hurricane Charley struck.  That may have been the final blow had it not been for a group of determined citizens who worked to preserve the building that now serves as the home of the Supervisor of Elections and staff, as well as an office for Representative Tom Rooney, and a juvenille court.

Take some time during Punta Gorda's Founders' Day Week to travel back to the 1920s with County Supervisor of Elections Paul Stamoulis and staff to discover the history and stories of this wonderful old Punta Gorda building.    More information.

Find out more about events during Founders' Week. 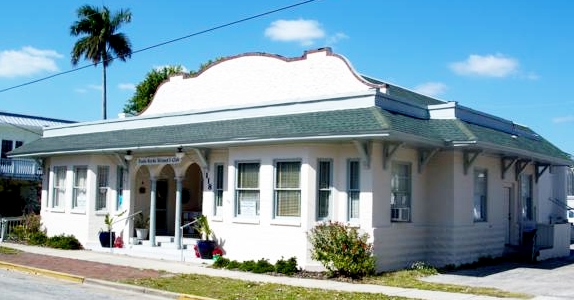 It was November, 1918 and Punta Gorda was celebrating news that came first by way of Fort Myers where the conductor of a north-bound train and his passengers yelled out that the "great" war had come to an end.  As soon as the news was confirmed by a special dispatch to the Punta Herald "bedlam broke loose" and the then President of the Punta Gorda Fortnightly Woman's Club, Mrs. Francis B. Hewitt led the group in song, the National Anthem, the Star Spangled Banner and other patriotic songs.   The Fortnightlies was initially a literary group, but from evidence found in their regular reports in the Punta Gorda Herald  also engaged in social and charitable activities, much like  today's Punta Gorda Woman's Club, which had its origin in 1925 when the Fortlighties (the oldest group founded in 1896) merged with the Married Ladies Social Club and the Women's  Civic Improvement Association. The Civic Group was credited for getting laws passed to  control cattle from roaming freely over lawns and properties.

It was Mrs. N. C. Hewitt (called "Frankie), who became President of the new club in 1925. And it was she with the early leaders of the club, in particular, Mrs. J.H. Hancock, that drove the building of the club's home on Sullivan Street in 1927.

Many of the purposes of the original three clubs have been perpetuated by the Woman's Club over the course of its ninety years.  The Punta Gorda Library owes its existence to its early start by the Woman's Club, which the Club built to 5000 books before it was turned over to the County and moved to a location on Retta Esplanande in 1958 and later to its current location on Shreve St.   The Club also contributed to the development of Ponce de Leon Park. 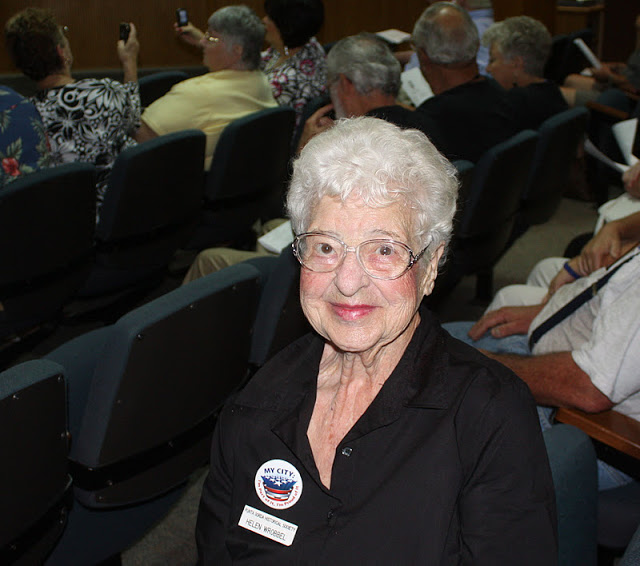 Long time Punta Gordan Helen Wrobbel who passed away in 2014, guided the club for many years as it continued its mission to serve the Punta Gorda community through support of local Veteran's organizations, scholarships, service to the community's children and many other worthwhile projects.

The Club, in keeping with its roots, will hold a Historic Tea to celebrate its Anniversary on Sunday, December 6 at the Woman's Club Building at 12:30 p.m.  Jacquelyn Pierce, member of the Naples Woman's Club will present "A Conversation between Mrs. Kennedy and Mrs. Lincoln." The event is part of the Punta Gorda Founders' Day Week Celebration.   For tickets call 941-979-0964. 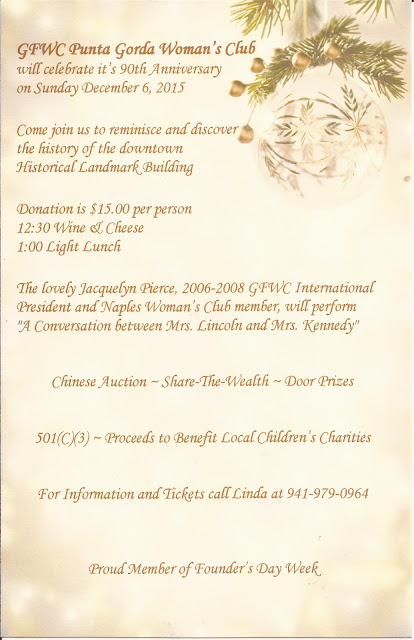