Gone But Not Forgotten - The Historic Tower Bar of Riverside Drive 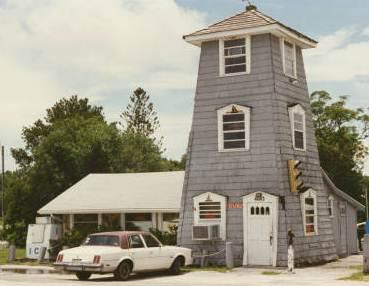 Many iconic historic structures in the Punta Gorda area are gone with the winds from Hurricane Charley.  One, a  relic of a key part of Punta Gorda's history, was a 30-foot tower that stood at the head of a creek right off Riverside Drive and US 17.  The tower was originally built as a sales office in 1921 at the start of the Florida land boom by William W. Wilson, a developer and vice-president of the Punta Gorda State Bank to attract potential buyers to land he had platted and provide a vantage point for them to view the area.   It became a successful beacon so much so that Mr. Wilson leased out the building to Chauncey and Lillian Headley as a home and part time business.

The Headleys operated a gas station and built a small cottage next to the tower for a living space and used the second floor of the tower as a bedroom.  Later the Headleys moved to town and rented the cottage as a tourist cabin.  Over time they started a barbecue business on the weekend. People from Punta Gorda would drive out to buy a roast pork sandwich.  They had a tent camp on the same land as the barbecue pit.

The tower survived the hurricanes of the 1920s, but the economy did not, ending the land boom and starting the depression.  The Headleys gave up their lease and Wilson sold the tower to Jesse Lanier , who built more touritst quarters on the property.  The cabins were used during WWII by families of cadets at the Punta Gorda Army Air Base.

After the repeal of prohibition, another owner, Sam Curtis, turned the old filling station into a bar, which was later purchase by a Mr. Kristyensen from Long Island, N.Y.  He filled the place with automobile memorabilia, license plates dated back to 1913 and old theatre posters.  A real traffic light told patrons when the bar was open or closed or "last call."   The bar passed through two more sets of owners,  And in 2004, the tower failed to survive another hurricane.  Hurricane Charley brought the it down, all in one piece.  The then owners, the Ervings, salvaged what they could and turned the bar into a tikibar on the creek.

If you have memories or more details about the Tower and the bar, please share them with us.

Email ThisBlogThis!Share to TwitterShare to FacebookShare to Pinterest
Labels: Bars 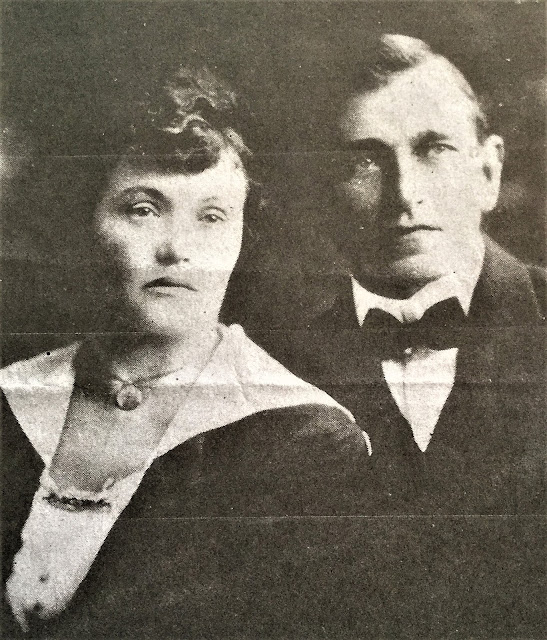 These days after moving south of Burnt Store Road, I frequently cross the railroad tracks from Tamiami Trail onto Acline Road to get to the History Center.  As I drive along this peaceful country back road as it winds its way along Alligator Creek, it would never have occurred to me that one day long ago there was a moonshine tavern here referred to by various names over the course of its existence, with one name that sticks out as a reference to its violent past, "the Bloody Bucket."

The Bloody Bucket in the early 1900s was a notorious oasis in the midst of  the "dry", alcohol verboten counties of south Florida.  Even before prohibition set in nationwide, Florida counties including DeSoto (Charlotte after 1921) were given an ok by the state to prohibit alcohol sales.   By regulars of the place, the Bucket was referred to as "McGraw's Place," after it owners and moonshine makers, Geroge "Mac" and Virginia McGraw.

The McGraws provided the only escape for workers at the village known as Acline (AC-Line from the Atlantic Coast Railroad stop) where there was a turpentine camp and lumbering operation. Essentially Acline was a loading dock where turpentine and lumber could be loaded onto boxcars. The McGraws made a strawberry wine concoction that they mixed from strawberry flavoring bought from the Seminole Pharmacy in downtown Punta Gorda and moonshine.   Mrs. McGraw would pour the flavoring and moonshine together in big wash tubs.  This was sold to mostly younger boys, while the turpentiners, lumber jacks and railroad section gang that frequented the place would buy straight moonshine for two-bits (a quarter) a pint.

Saturday nights, after the Acline area workers were paid and the place became rowdy according to a quote from Harry Goulding, who was the bookkeeper for the McGraws, "a pint of moonshine was enough to dull a thirsty man's assessment of another's size and fighting ability."  Knives and guns became the great equalizers.

Mac was a mean man according to Goulding.  And one day, the sheriff got a call that there was a shooting at the Bucket.  When he arrived, the sheriff found Mac McGraw and another black man dead from shot-gun blasts.  Mrs. McGraw claimed that the black man had come to the door brandishing a gun asking for money and whiskey.  McGraw, she said, cursed him and the man shot him and ran.  She claimed that McGraw, mortally wounded, crawled after the man and shot him dead and then also died.

The Sheriff wasn't the only one to doubt the preposterous story.  More likely, as was suspected, either Virginia McGraw, or her boyfriend Dick Windham (suspect in the Marshall Bowman murder) killed Mac and then the black man to pin the killing on him.

After the Tamiami Trail was built (around 1921), the Bucket lost its front entrance and Mrs. McGraw moved her door to the side and continued to serve customers who came as far away as Tampa or Miami for whiskey.  During prohibition, Ma McGraw (as she referred to) had bootlegging connections from the Bahamas to procure whiskey.  After prohibition was repealed in 1932, she hired waitresses and turned the place into a legitimate bar and restaurant and renamed the place, "the Alligator Bar."  A.C. Frizzell, Charlotte County's richest cattleman hungout there, and ended up marrying one of the waitresses after his first wife passed away.

Dick Windham was appointed by Governor Hardee to the first board of county commissioners when Charlotte County was formed in 1921. He and Virginia McGraw were married in 1946 in Lee County. She died in 1948, he died in 1953. George "Mac" McGraw, Virginia McGraw Windham and Richard "Dick" Windham are buried side-by-side in Indian Spring Cemetery -- Virginia is in the middle. The McGraw and Windham graves are among those featured during the Charlotte County Historical Center's walking tours of Indian Spring, btw. Next cemetery tour will be during Founders' Week in December.

John J. Panio, Sr. of Cape Coral, who passed away on March 7, 2014 was employed by the City of New York Department of Transportation and relocated to Florida in 1972 to purchase the Alligator Bar in Punta Gorda. .

With the opening of the Barron Collier Bridge in 1931, the town threw one of the biggest 4th of July celebrations it had ever celebrated.  Decorated cars paraded downtown and the day was capped by a fish fry at Gilchrist Park with Punta Gordans ushered into a huge tent where fried mullet was served. Below are some photos from July 4, 1931. 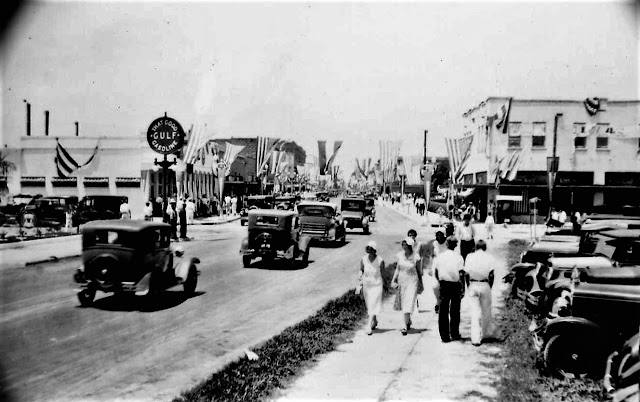 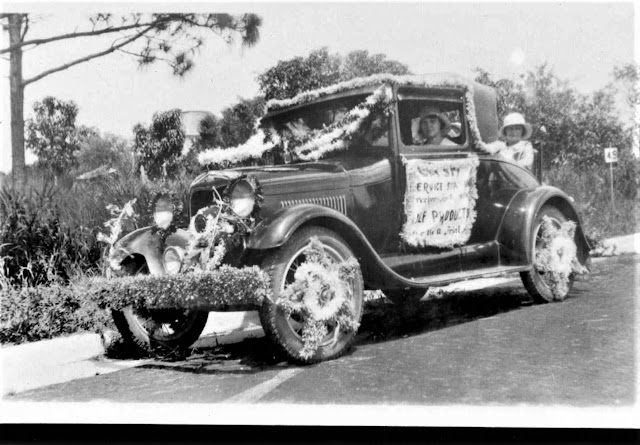 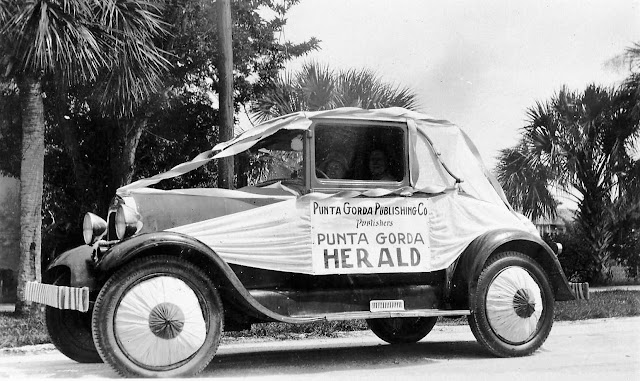 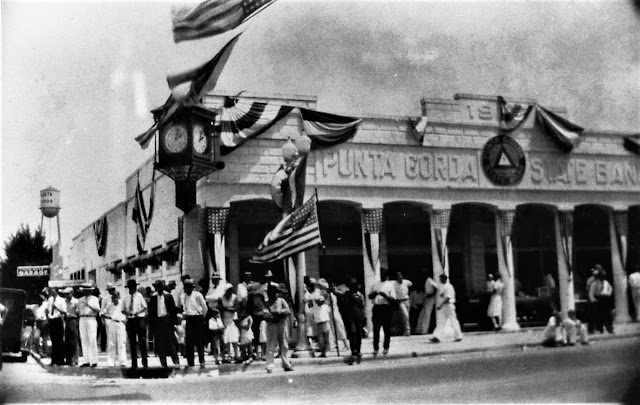