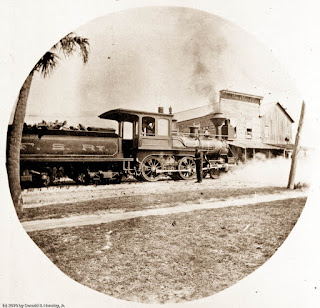 The coming of the Florida Southern Railroad whose last track into Trabue (the original name for Punta Gorda) was laid in July of 1886 marked the beginning of the development of the town.  For it was then with more direct and comfortable transport into the town and the building of the first hotel to attract passengers that people from the north with money to invest arrived in Punta Gorda.

Isaac Trabue convinced the railroad owners to come to his new town rather than the other choice, Charlotte Harbor, on the north side of the Peace River.  The Hotel Punta Gorda which was built on land dedicated to the railroad by Isaac Trabue first opened as best we can tell on February 20, 1886 - widely advertised in northern newspapers of the time.  It's first true season, however, occurred starting in December of 1886 shortly before Trabue was incorporated as Punta Gorda.


The railroad built two wharves to support passengers and freight and also steamboat passage to and from New Orleans and Key West and later to Fort Myers.  The first was immediately adjacent to the hotel, so railroad passengers could disembark there.  The second was located further west (starting on land where the Isles Yacht Club is today). That wharf was referred to as the long dock.

Albert W. Gilchrist who was the main surveyor laying out the route from Bartow to Trabue became one of the new town's prominent landowners and citizens and later a Governor of Florida