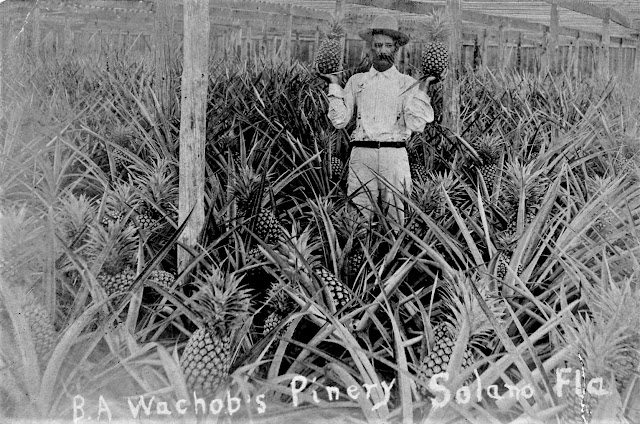 It may surprise most living here today that pineapples were once grown in and nationally marketed from Punta Gorda long before they were a major crop in Hawaii.  The earliest settlers to southern Florida found the fruit under cultivation and reported on it as early as 1881 (Barthoff and Boggess brochure), and used the potential of earnings from pineapple growing to lure settlers to the Charlotte Harbor area.  It was possibly one of the draws for Isaac Trabue’s purchase of 30 acres of land he’d never seen south of Charlotte Harbor Bay.  Trabue also ended up setting aside a block in the town he created to grow the fruit and fund an annual chess tournament.

Many of Punta Gorda’s early residents also invested in pineapples including Albert Gilchrist, Kelly B. Harvey, and Perry McAdow.  Sometime in the late 1890s a company was established for pineries east of town in Solona.  Its annual report in 1904 listed Perry McAdow as President and Charles Davis as General Manager. A new breed of pineapple, the Cayenne, a very large variety with smooth skin, was introduced there.     Over 2200 crates of pineapples had been shipped the previous year from the Pineapple Center.   A 1896 newspaper article indicated that “the finest pineapples were grown here at great profits.”

There were ten families living and working the pineapple farms at the Solona-based center.  In addition, the company offered planting and cultivation of pineapples for investment to non-residents.  Some of these were locals like Ed Wotitzky, who owned a retail and shipping business and John Jack.  Others were northerners.  One William Whitten, who became a Charlotte County Commissioner and built the first bridge over Charlotte Harbor,  moved to his Solona Pinery in Punta Gorda in 1902.

In 1914 a new corporation was found to seek financial investors. T.C. Crosland, founder of the West Coast Fish Company,  was the President.  B.A. Wachob and C.G. Brown, major pineapple growers, were among the Board Members.  The corporation offered stock to fund the growing of the plant, which took two years to bear fruit.

At its peak, Punta Gorda’s pineapple production was the largest in the nation and the industry was second to commercial fishing as Punta Gorda’s principal business.  But in 1917 a disastrous freeze hit the area and wiped out the pineries, and by then it was cheaper to grow the plant in Cuba. Also, unfortunately for Punta Gorda’s industry, around the same time, James Drummond Dole had established the Hawaiian Pineapple Company.  He bought the entire island of Lanai and made it into the largest pineapple plantation in the world.

The era of the Punta Gorda pineapple was over.

A Former Punta Gorda Mayor was part of Normandy Invasion 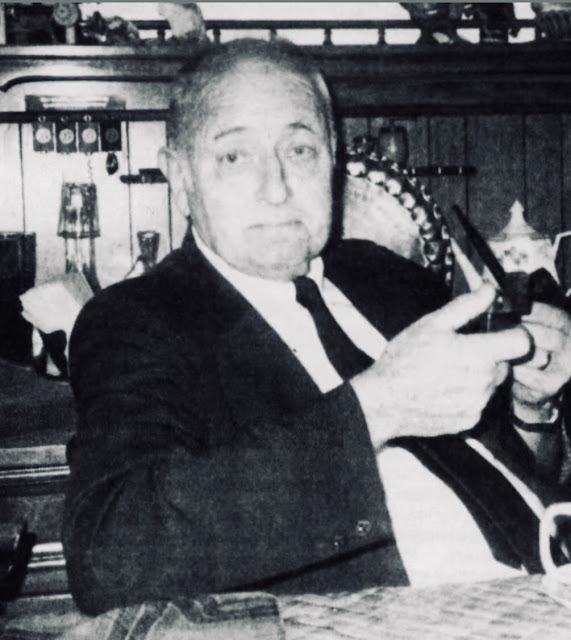 Seventy-five years ago Dana Burke, a 28-year old Princeton teacher of military history, entered the Army and then joined thousands of other American soldiers as part of the Normandy Invasion.   Later at 52, after a career as a sales manager in Canada, he came to Punta Gorda and immediately became civically engaged leading to a position on City Council from 1982 to 1986 as well as a term as the City’s mayor.  He also was President of the Punta Gorda Isles Civic Association, member of the School Board, and a volunteer tutor at local schools.

Burke, a Princeton graduate, was among those, who after serving their country and  having successful careers, came to Punta Gorda and shared their skills to help grow and improve the City.