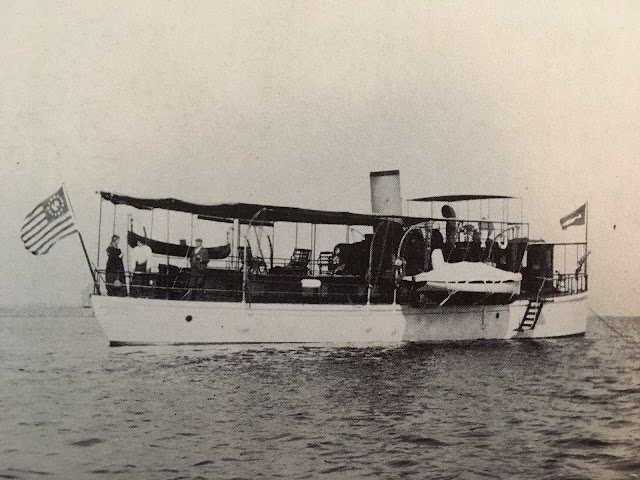 In the early years of Punta Gorda, in addition to sailboats owned by the town’s residents, many visiting yachts sailed into Charlotte Harbor perhaps our first "snowbirds."  A number docked at the Hotel Punta Gorda, some staying there as a base for the entire winter season.

Around this time, one hundred years ago, the Aroostock would be sailing into Charlotte Harbor.
Owned by Charles A. Dean, President of the Hollingworth-Whitney Paper Company in Maine the Aroostook was likely named after a river and county in Maine.  Mr. Dean with his family was a regular winter visitor in Punta Gorda from 1888 until his death in 1921.     The Aroostook was built in 1903.

Dean would often rent the tower floor of the Hotel Punta Gorda for the season. He would then sail with his family down the Myakka, to Pine Island and Sanibel and Captiva down to Fort Myers and further. They frequently went fishing for tarpon.  If their boat was too large to navigate the streams, they leased Captain Connolly’s launch to take them. 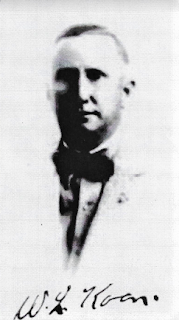 W. Luther Koon (1873-1956) was a “pony-express” rider and cowman, who became one of the area’s largest cattleman, President of the Punta Gorda State Bank and one of Punta Gorda’s most prominent citizens.

Koon was born in Manatee County in 1873.  While still in his teens, he rode 80 miles a day in Florida’s version of the Pony Express and began acquiring cattle with all the money he could spare to invest.  In about 1895, he and his new bride, Serena Victoria, moved to Punta Gorda, where he became a merchant furnishing supplies to the phosphate and turpentine camps.

At about the turn of the century, he built a large house on Sullivan at Charlotte Avenue (1) and brought his widowed sister and her children (including Sallie Jones) to Punta Gorda from Barstow.  Meanwhile, he continued to build his holdings, and by 1909, Koon owned many residential lots in Punta Gorda, 1000 acres of land and 600 head of cattle.

A hardworking and shrewd businessman, he recognized the opportunity in ranching and meat processing, and in 1910 he incorporated “the Big Cattle Company.”  Then in 1917 when the Punta Gorda Bank needed recapitalization, Koon made an investment entirely in Spanish gold coin (the payment received from Cuban ship captains when buying cattle at the cattle dock).  He became president of the Punta Gorda State Bank.

His first wife passed away in 1919 and he later married Elsa Sophia Holtz.  They continued to make their home in Punta Gorda, which Koon wanted to see become one of the outstanding cities on the southwest coast.  Koon worked tirelessly for the successful development of the City and the County.  In addition to his role with the DeSoto Cattle Wharf Association, the bank, and his several enterprises, he served many years on Punta Gorda’s City Council.

(1) His original house in Punta Gorda was located at Sullivan and Charlotte.  It was moved in 1999 to 360 West McKenzie. Photo Below: 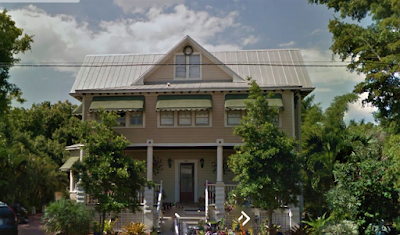 The First United Methodist Church of Punta Gorda is 130 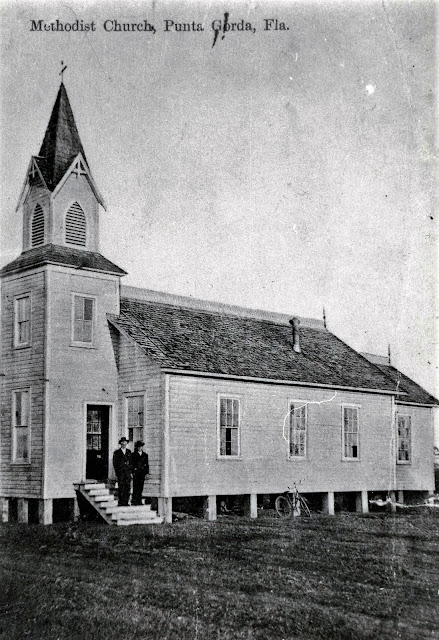 You won't recognize the building that once stood near where the First United Methodist Church of Punta Gorda stands today. Now its actually part of residence on Harvey Street. But this building was the original home of the Methodist Church and the first church building (actually used by several religions) in Trabue now Punta Gorda.


On Sunday mornings on the far-flung Florida frontier of the 1800s before Isaac Trabue landed on the shores of the Peace River, there were no church buildings for people to gather for worship. Preachers typically arrived on horseback or sometimes in a wagon if roads permitted. The communities they served comprised a “circuit”, attached to a church in larger town. Most of these circuit-riding ministers were associated with the Methodist faith and it was they who brought the Methodist Church to Florida and places like Punta Gorda.

But the new settlers of Trabue expected a real town with a real church and a school and a place for the people to meet and socialize, and they began demanding just that. So, in 1886, Isaac Trabue provided the land in block 29 for a building that would serve for a time as a multi-denominational church, school and community center. It was then Judge G.W. McLane and F.M. Durrance who spearheaded the movement that led to the establishment of the First United Methodist Church of Punta Gorda in that building in 1887.

Durrance, a local preacher and customs officer for the port of Charlotte Harbor, acted as the church’s pastor until Rev. W.C. Jordan was assigned to the church that December. The first record of members being received was in July of the same year, the first official members were G.W. and Emma McLane.  Initially, the Baptists, Presbyterians and other denominations worshipped along with the Methodists in the communal sanctuary, until 1889 when the building was deeded over for sole use as the United Methodist Church (though apparently the Presbyterians continued to worship there for a time).

Construction began in 1912 of a new church, near the old one that had been badly damaged in the 1910 hurricane. Mostly built by 1914, it was used in an unfinished state until finally completed around 1920. It now stands with its beautiful stain glass window as a beacon and landmark for Punta Gorda’s historic district.  And the old building.. remnants of the sanctuary were discovered at a residence on Harvey Street where it had been moved in around 1914.
at 8:28 AM 0 comments