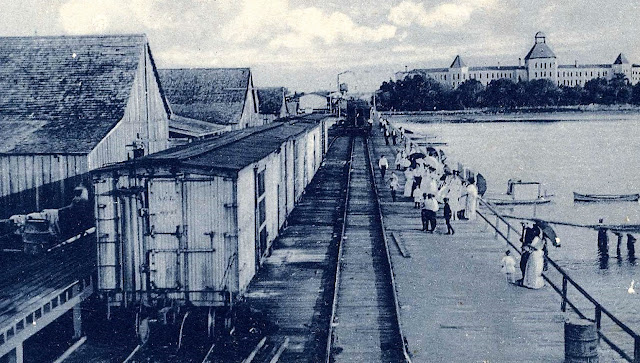 The Railroad Dock at the foot of King Street was the hub of Punta Gorda’s commercial activity from 1897 until 1928.  In addition to being the commercial seafood center, it was the port for steamers connecting with the railroad.

The Henry Plant-controlled railroad company constructed the pier after making the decision to abandon the Long Dock which extended to twelve feet of water.  The King Street dock reached only five feet of water. The South Florida Railroad at Tampa was to be the only rail connected with deep water on Florida’s west coast.

Punta Gorda’s Railroad Wharf served the people of the community until 1928. This circa 1908 view of the wharf is from a point in front of the warehouse and shows a few fish-packing houses to the left. The Punta Gorda Hotel appears in the distance.  A fire on the dock in 1915 was a crippling blow to the fish industry.

The Wharf was used by the fishing industry until 1928 when the construction of the Barron Collier Bridge was started and the fish wholesalers moved to the Maude Street Dock.