The Hotel Punta Gorda Made Trabue (Punta Gorda) a Reality 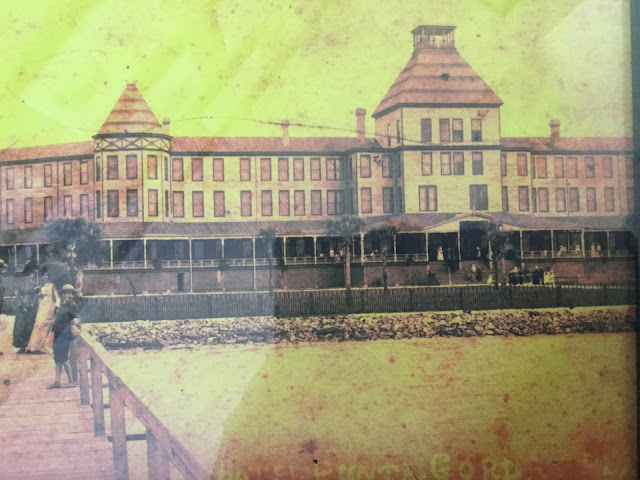 In October of 1885, Isaac Trabue wrote to his cousin about his negotiations with the owners of Florida Southern Railroad of Boston to bring their new road to his town of Trabue on the peninsular land of Punta Gorda.  In the missive, he spoke of how if his town became the terminus of the road “the Yankees will build grand hotels and Trabue will become a city in reality.”  And that is exactly what happened.

In July of 1886, the railroad pulled into Trabue for the first time carrying over 200 workers who would build not only a grand hotel, but a 1200 foot railroad dock extending out across Charlotte Harbor Bay adjacent to the new hotel.  Completed in a little over six months, the hotel first opened on February 20, 1887 and welcomed its first guests in time for the following winter season.

The Hotel Punta Gorda, luxurious for the time, was a three-storied structure with a central tower that extended higher.  Advertisements for the resort proclaimed that the hotel had gas, electric bells, steam heat and open fire places.  They noted that it was supplied with “pure water, perfect drainage and fire protection.” News articles touted the magnificent grounds and fishing and sailing from the dock. They also noted the ease of arrival from the railroad terminal right at the hotel's entrance.

Situated on the harbor, the hotel had a large promenade, verandas with yellow roses climbing the railings, and 135 rooms, each with views of the bay.  Palm trees adorned the grounds to provide a tropical ambiance.  Tourists could bath from the hotel’s beach on the bay, take boat rides from the dock, go fishing or shooting.  Promotions to attract seasonal visitors were placed in many of the major magazines of the day.  Appealing to the wealthy, some of the early guests included W.K. Vanderbilt, John Wanamaker, Thomas Edison and Andrew Mellon.

The hotel enabled visitors like Perry McAdow to stay in Punta Gorda and discover its charm and to make decisions to invest in the nacent town.  It was these and the other early arrivals with the railroad including Albert W. Gilchrist,that helped as Isaac put it make Trabue and ultimately Punta Gorda a reality.

Unfortunately, the hotel didn't fair as well.  Only open to visitors during the winter months, the hotel fell in to disuse and disrepair and ceased to open for the season many years.   In the late 1920s, the hotel was totally refurbished and reopened as the Hotel Charlotte Harbor which also met with distressing times as the depression hit.  After several attempts were made at reviving the grand lady that adorned the Punta Gorda's  harbor, the hotel was destroyed it a fire in a few hours in August of 1959.

The Princess Hotel Story - Destroyed in 1975 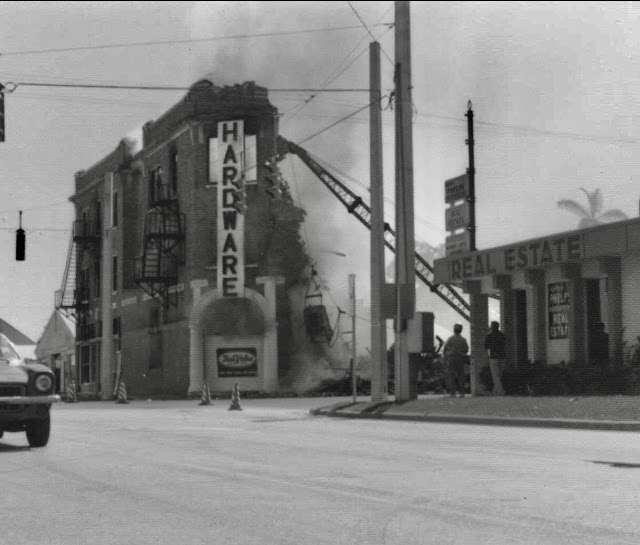 It was Sunday, February 9, 1975 and the rubble from the hotel that had burned down the night before still smoldered.  Already the police had jailed a young suspect for setting the building that had stood for 50-years on the corner of Taylor and Marion Avenue ablaze.

The Princess Hotel, which in 1975 was nothing but a storage facility for its owner, started life in 1925 as the Charlotte Bay Hotel. At that time and for years later it was a favorite place for tourists, business men, conventioneers, and even a sports team – the Baltimore Orioles stayed when they did spring training in Punta Gorda. The hotel was touted for its location on the Tamiami Trail and Dixie Highway, elegant furnishings, bath in every room, and water from its own artesian well. In the 1930s the owner of the Princess Hotel in Atlantic City, New Jersey purchased the hotel and began advertising it as a winter getaway alternative.

The Princess saw her last years as a hotel under a man named Paul Riddle who bought it in 1955. It had no restaurant, just rooms. A few shops were located on the ground floor. Local organizations held some of their meetings there, and there were some large parties thrown within its walls as well in the 1950s and 60s. Mr. Riddle then sold the building twice, once to a man who wanted to renovate only to have to foreclose on him shortly after the purchase, and then to a man who wanted to turn it into a senior-living facility. When that didn’t work, Riddle got it back again and ended up using it for storage.

The site of the Princess Hotel, which is now the home of the Sunloft Building with FM Don’s Restaurant on the corner, was the location of one of Punta Gorda’s first hotel’s, the Dade built in 1887, which was later named the New Southland, then the Seminole Hotel. Teddy Roosevelt stayed at this hotel when he visited in 1917. Then when plans were made to replace the old Seminole with the Charlotte Bay aka Princess in 1925, that structure was moved one block west to Marion and Sullivan, only to lose its life in a fire as well soon after the move. 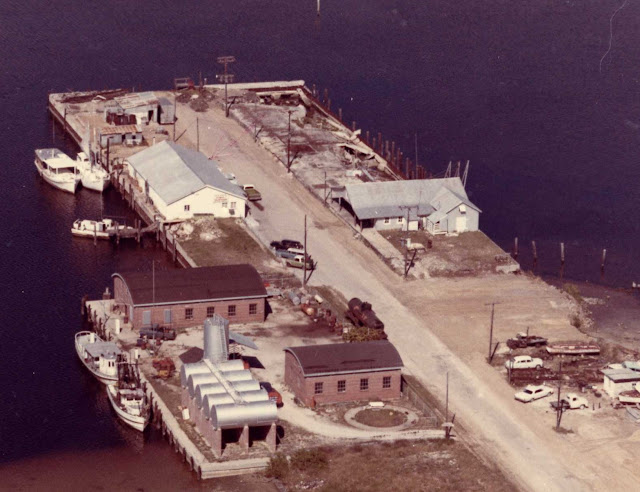 What we now know as Fishermen’s Village is located on the site of the former Maud Street Dock. The Maud Street City Dock was built in 1928 to replace the King Street Pier, home to the Punta Gorda fishing industry. The old pier had been removed to make way for the new Barron Collier bridge and to relocate the fishing businesses away from Collier’s newly renovated Hotel Charlotte Harbor.

At one time there were as many as seven companies that operated the fish packing houses on the Maud Street Dock, but by the mid-1930s, this had shrunk to two, the Punta Gorda Fish Company and the West Coast Fish Company. The pier was also occupied by the Gulf Oil Company. Across from this was Matt Week’s Boat Shop, which had adjoining shore space for boat sheds and marine services.

Over time the dock and remaining buildings fell into disrepair, and in 1977, the city council moved to permit its reuse as a shopping and dining attraction. In February of 1980, Fishermen’s Village opened on the original Maud Street Dock.
at 7:52 AM 1 comments