In the early 18th century, Spanish-Cuban fishermen discovered Charlotte Harbor to be a rich source of a variety of fish.  But the distance from the Harbor to Cuba presented a problem.  Spoilage.   The original solution was to soak the fish in saltwater, then dry and press it.  The Cuban fisherman continued to fish the waters of Charlotte Harbor off and on (somewhat disrupted by wars, the British takeover of Florida in the latter part of the 1700s, and then by the United States acquisition of Florida in 1821).

By the later part of the 1700s they were packing their catch in salt for transport back to Havana.   By this time, they had established permanent or semi-permanent camps or “ranchos” in the Harbor.  But the nascent fishing industry was disrupted again when tensions between the U.S. and the Cubans over control of the fisheries in Charlotte Harbor led to the murder of a customs official at Useppa Island in the 1830s and ultimately to the abandonment of the fish camps.  While according to a survey by Goode after the Civil War, some camps had been re-established, it wasn’t until Isaac Trabue founded his town that fishing reemerged as a major industry  -- and the difference this time was ice.

Trabue opened his first ice factory in 1891, the only product was ice for the mullet season.  The factory located near Berry and Olympia turned out over 15 tons a day to support the early industry and was powered by steam.  But by 1895 a competitor emerged, a group of Punta Gorda business men including L.T. Blockson, James Sandlin, Charles Davis, John Farrington and Albert Dewey established the Punta Gorda Ice and Power Company.  The plant located at the corner of Tamiami Trail and Virginia turned out 25 tons daily. A sideline was the sale of electricity for homes and businesses near the factory.  It was able to produce ice cheaper than Trabue’s factory which was forced to close in 1897 once Plant removed railroad tracks west of King Street (Tamiami Trail).  Undeterred, Trabue connected with a consortium of Philadelphia investors to establish the Consolidated Manufacturing Refrigerating and Fish Company and erected in 1903 what was touted as the largest ice and freezing plant in the world.  This plant which turned out ice cubes weighing 6,000 pounds only operated for only a short while.

The Punta Gorda Ice and Power Company used ammonia as the refrigerant. After first being compressed in a large cylinder, the expanding ammonia gas supercooled in an adjacent tank of brine. Then, when a series of steel buckets, suspended from the ceiling, each containing about 30 gallons of water were immersed in the supercooled brine, the freshwater inside the buckets would freeze into blocks of ice.

A system of ice stations was developed for collecting iced fish from the ice stations, scattered throughout Charlotte Harbor.  Then the traditional salt fisheries were abandoned. Instead, run boats would carry ice to the stations and deliver fish back to the fish houses in Punta Gorda.   Fish would be packed in bins on boxcars with alternating layers of ice for train shipment north.  (In one month during World War II when meat was rationed, the Punta Gorda Fish Company shipped almost 2 million pounds of fish north.)

In 1913 the Ice and Power Company structure was expanded.  Perry McAdow who owned the controlling interest at the time sold the company to Southern Utilities.  Ultimately it was purchased by Florida Power and Light.

Van Itallie, Theodoric B. Triumph of Ice over Salt - the Changing Face of Commercial Fishing in Charlotte Harbor

Williams, Lindsey, Our Fascinating Past, the Early Years 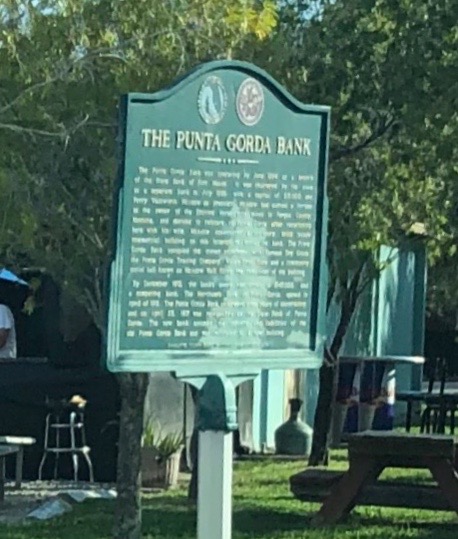