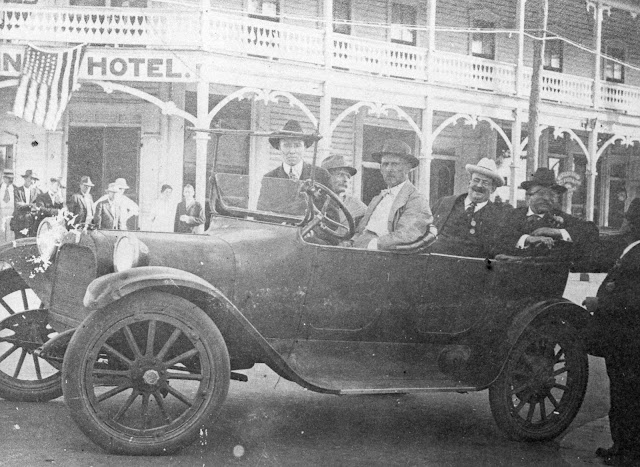 On their first day of fishing , Roosevelt succeeded in harpooning  two “devil fish”, one of small size and the other a huge creature  measuring over twelve feet across. The latter nearly capsized their boat. While here they also explored the surrounding waters, spending one complete day  inspecting the bird rookeries near Matlacha. Captain McCann was their guide and transported the party between Punta Gorda and the inlets and passes of this area.
at 9:28 AM 1 comments


It was James L. Sandlin, an early pioneer and former City Councilman and Mayor of Punta Gorda, that brought his 25-year old sister, Martha Suzanna to the nascent town of Trabue in early 1886. It was there that she was introduced to and soon married Sandlin’s business partner, James M. Morgan, a cattleman and owner of citrus, lumber and shipping businesses. It was a marriage arranged to cement the Morgan-Sandlin partnership.

One of Punta Gorda’s true pioneer women, Martha, after the early death of her husband, hired an architect to design and build a large, turreted house on Retta Esplanade (near the end of Sullivan Street) to raise their seven children: Frances, J. Henry, Jesse, Maude, Mary, Kate and Violet. All the while she continued to oversee her deceased husband’s large, local enterprise with the help of her children and grandchildren whom she engaged in the various businesses. She continued to do so until her death in 1946.

Martha owned all the lands that surround Alligator Creek, the location of her cattle ranch, orange groves saw mill, and storage facility for the Morgan Sandlin Shipping Company that ran ships up and down the coast of Florida to bring materials and goods to Punta Gorda.

She was instrumental in donating three acres on the west side of Taylor Road at the Alligator Creek Bridge for use as a dam site, which helped accommodate the city’s need for a water supply, and a park. Martha also was instrumental in the donation of land for the community’s cemetery on Alligator Creek, “Indian Springs,” and helped with funding the building of the First Baptist Church, where the Sandlin and Morgan families were among the first worshippers.

Her work effort and dedication to the community contributed greatly to the development of Punta Gorda.
at 5:03 AM 0 comments