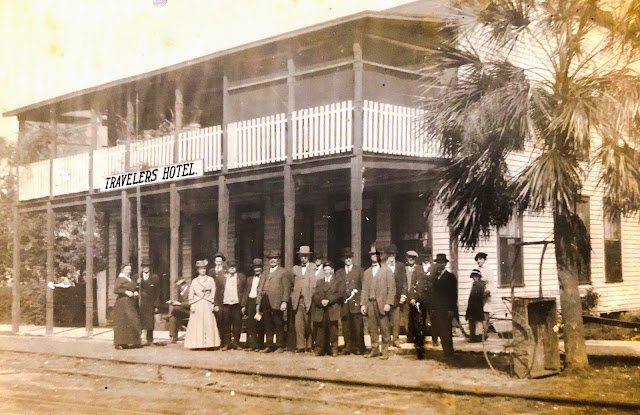 The Travelers Hotel in the photo above from about 1914 was originally the Ingram Hotel for Negros. Located close to the railroad, on then King Street now US41 North near Marion Avenue.  From the 1910s as the Travelers,  it became a popular choice of “drummers” (salesmen) when they came by train to Punta Gorda.

Early records show that the hotel was managed in its early years by a Nettie Johns.  Later Mr. and Mrs T.J. Foye purchased the hotel and took over management.  It was known as the Travelers Hotel until 1930s. A  Sanborn Map of 1932 refers  to it as the Punta Gorda Hotel.

From unpublished research by Scott Shively.

Email ThisBlogThis!Share to TwitterShare to FacebookShare to Pinterest
Labels: Hotels


Early records indicate that the first school in Punta Gorda was started in 1888  in a community building provided by Isaac Trabue that served as a multi-denominational church and school.  The school apparently was unsatisfactory and several private schools were initiated including one by Miss Norma Pepper at Olympia and King St. (now US 41 North) sometime after she arrived here in 1896 with her father, John Charles Pepper, and her sisters.

Her school building, described in 1897 as a small graded school, was destroyed in the 1910 hurricane. She then provided classes at her home on Retta Esplanade and Cross St. (41 South). In around 1890 a “Punta Gorda High School” that included all grades was built on Goldstein Street as a one story building, with a second story added later. There is no record of Miss Pepper teaching there,
though it did include an elementary school as well as a junior-senior high school.

In 1909, Miss Pepper was appointed President of the Woman’s School Improvement Association which was charged with building a new school. Indications were from newspaper articles of the time that there was dissatisfaction with the existing building on Goldstein Street school. By 1908, the combined school was very overcrowded. The then Principal, Professor U.S. Whittaker, drew up plans for a new school.

Governor Gilchrist provided the land for the new school at Charlotte and Taylor Street, which was finished in 1911. Miss Pepper became its primary teacher (first grade).  The Taylor served the community as a high school until Charlotte High School was opened in 1927, it continued to operate as a grade school well into the 1950s, until it was largely replaced by Sallie Jones Elementary and destroyed in a fire in 1958.
at 9:30 AM 0 comments