The Ladies Who Built a Municipal Bath House for Punta Gorda 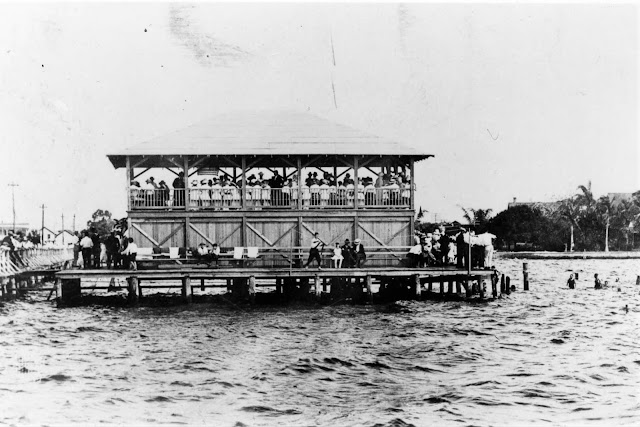 At a time in the Country when women were denied a political voice and an opportunity to explore topics beyond children and household chores, woman’s clubs were  formed for civic, enrichment, social and charitable purposes and became an important part of the fabric of cities and towns throughout the nation. These clubs, most of which had started out as social and literary gatherings, eventually became a source of reform for various issues in the U.S

Punta Gorda in the late 19th and early 20th century was a new frontier whose business and civic life was dominated by men. The women of the young town used clubs to participate in an active social and intellectual life, but also formed other organizations to make an impact on the growing community. One of these groups explicity formed to address civic issues  was the Ladies Civic Improvement Association (a forerunner of the Woman's Club still active today).. Not only did these women push for changes in the community, often successfully (getting the city to stop cattle from roaming the streets, for example), they published a booklet to promote Punta Gorda in pictures and words, and raised money for community projects. One such project was the Municipal Bath House.

The Municipal Bath House was built off the City Dock of the day which extended into the harbor from Sullivan Street. The Bath House, officially opened in April of 1916, came about as a result of the Ladies’ Civic Improvement Association’s fundraising efforts. The ladies raised two thousand dollars, organized volunteer labor and acquired donated material to erect the swimming platform with a pavilion and dressing rooms. They held suppers, participated in the annual Punta Gorda Pfun Festival with booths, and organized even more bizarre fundraising projects. According to Vernon Peeples one event was a great snake fight between rattlers and black snakes.

The Ladies also ran the facility and developed and posted rules for the patrons of the house. They charged 25 cents for admission which included a suit, towel and room, for 10 cents you could use a room and a towel – no suit provided.  Water, ball and mud throwing wasn’t allowed, but ducking and rough play was allowed outside the ropes. Swearing and obscene language was prohibited, and dancing wasn’t allowed unless previous arrangements had been made. (See the complete list below). 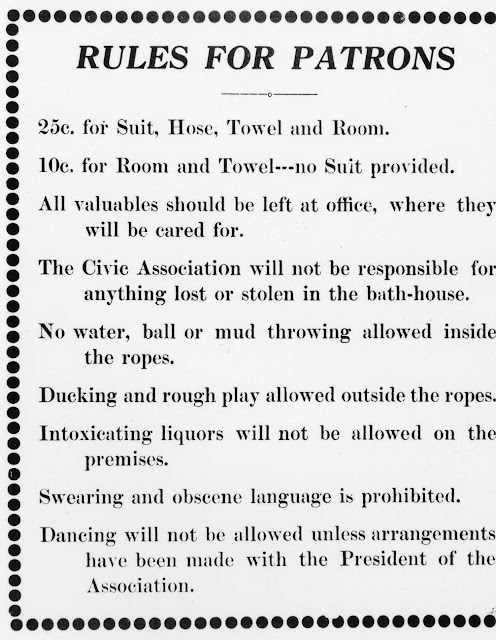 In an age when messages from friends and family are instant and constant, its hard to imagine a time here when early settlers waited weeks for communications from family and friends and home delivery of mail was non-existence.  From the town’s origin until 1955, Punta Gordans had to collect their mail at the post office, making it a core part of the community in its early years.


In the 1870s when the first homesteaders occupied the land on this side of the Peace River, they waited weeks for mail to arrive by boat.  The Howards, early residents of Solana, near where the Elks Lodge is today, had to watch for the boat that would deliver much needed packages and awaited correspondence from northern relatives.   They didn’t know which boat (The "Alice Howard" was one that carried mail and freight as well as passengers, and shuttled between Fort Myers and Cleveland, an early now defunct town northeast of Punta Gorda) would be delivering the mail and had to wade out into the river to pick it up, or cross the Peace to get their mail from neighbors across the Bay.


It wasn’t until the late 1880s when the railroad began moving towards the new settlement that a post office was established at Cleveland.  It is said that Isaac Trabue traveled to the Cleveland post office to collect mail for his new town of Trabue, which he distributed from his land office which  essentially was the town’s first unofficial post office.

In August 12, 1886 the first official post office was established at the train depot with Nannie Scott as it’s postmaster.  The depot then was located at King Street near Charlotte Avenue.  The post office was changed from Trabue to Punta Gorda on January 14, 1888.  George McLane succeeded Nannie Scott as postmaster, then, in 1890, Isaac Trabue named Robert Meacham, a black man, to
the post.

From the early 1900s the post office was next-door to the east of Blount’s grocery. Originally it was very small, then enlarged in the 1920s adding more mailboxes.   Its front was on Marion Avenue backing onto Herald Court.  The Hotel Punta Gorda, across the street, maintained a mailbox at this location.   Josh Mizell served as postmaster from 1898 until 1909 when Harry Dreggors, who owned the building where the office was located, took over the post.
In 1926 the post office moved to the Smith arcade across the street from the current location. At the time, George Rhode had become Punta Gorda postmaster. He persuaded his friend Smith to apply for the lease of a new post office for the town. Smith built the Arcade, with a central hall with stores on each side, one of the first in-door malls, leading to the post office in the back of the building.


Other early post offices were located on the Long Dock, at Villa Franca and at Acline (a railroad stop.  In 1893 when the Florida Southern Railroad was establishing a freight and passenger onnection to New Orleans and Havana, it constructed what became known as the Long Dock near where the Isles Yacht Club is today.  A post office was established there which was supported by the Punta Gorda office with Iva Bright as postmaster. It closed after the demise of the Dock in 1898. From 1910 to 1927 there was a post office at the store at Acline.  Also, east of what is now downtown Punta Gorda Villa Franca, a settlement of Cuban cigar makers, had its own post office.

Home delivery of mail didn’t start in Punta Gorda until 1955.

Lindsey Williams, Our Fascinating Past, Charlotte Harbor, the Early Years.