Elections in Punta Gorda 100 Years Ago

It was the year 1920, 100 years ago, and it  was an important election year for Punta Gorda.   In addition to an election that would ultimately put Warren G. Harding in the White House, Punta Gorda faced several other major decisions of its own. It would also be the last election where Punta Gordan voted directly for its mayor.

With much controversy beforehand as was the case in many Florida cities at the time revising charters,  city residents were voting for members of a revised City Charter Board that would reframe the governance of the City to a city commission (council)/manager form of governance.  J.N Sikes who was re-elected in 1920 as mayor would be the last elected mayor of the City.  Also of note Marian McAdow, in the year woman were first given the vote,  was elected to the Charter Board. It was the first time a woman held any position of political importance in the City.  It was said had Marian been a man she would probably have been one of our mayors.

The first commission was composed of three members who were ultimately elected in 1921 after the charter was finalized.  These were Max Price, R.K. Seward and T. C. Crosland.  The first advisory board was also established to include H.R Dreggors, J.N. Sikes, Clay Chadwick, Paul Garrett, C.L. Fries and W. M. Whitten  This board like current ones had no voting power.  Max Price was the first Mayor to be elected by the commission.  Soon thereafter, he took the position as first City Manger of Punta Gorda and resigned his place on the commission 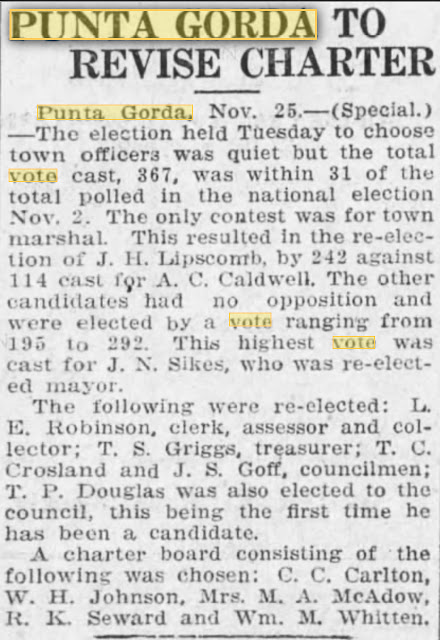