A Little History of the Celtic Ray Building 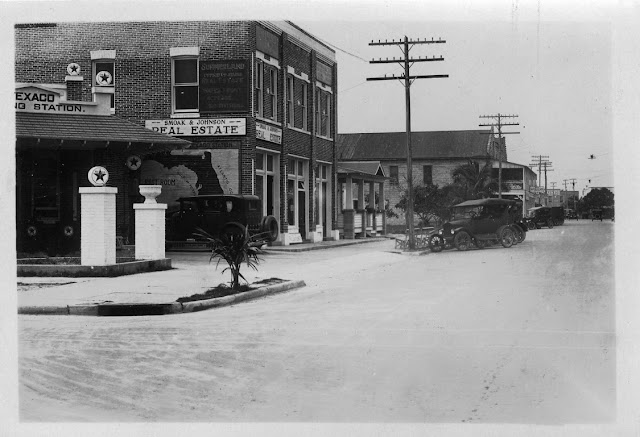 The Building which now is home to the Celtic Ray was built in 1924 by the Chadwick Brothers. It was originally constructed as an office and storage facility with a gas station on its perimeter corner. Earl Farr was an early tenant as was D. S. Smoak, who became one of Punta Gorda’s mayors. 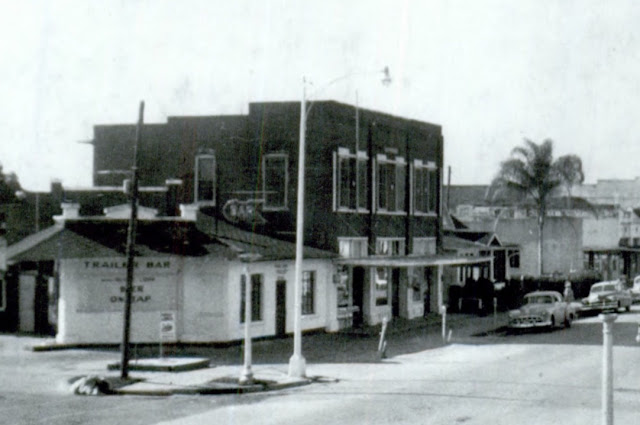 Later on the building was converted to restaurant/bar space and was the Trailer Bar for a long time through 1950s into the 1970s. For a time it was also the Sandbar Sandwich Cove and prior to Kevin Doyle’s purchase in 1997 the Parrothead Cafe.

Doyle purchased the rundown establishment and converted it to an Irish pub, first just the one building that had been the Trailer Bar and filling station, and later after Hurricane Charley, the larger building styling it like a Dublin pub with alcove. After some bumpy periods especially during the housing crisis when Doyle lost the place for awhile, the Ray was back and Doyle has been expanding ever since now to include a large outdoor beer garden. 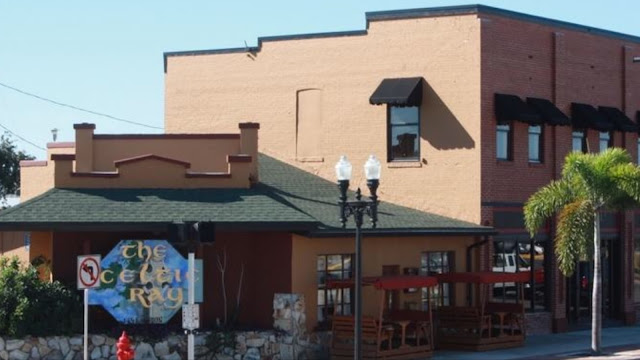 February 2019 marked the 170th anniversary of a little known visit to Charlotte Harbor by a US Army Board of Engineers as part of an inspection of the coast of Florida.  Captain & Brevet Colonel Robert E. Lee was a member of the four officer Board and was the Recording Secretary for that Board. The other three members of the Board of Engineers were Lt. Col. R.E. DeRussy, Major R. Delafield and Bt. Col. J.H.F. Mansfield.

The Board departed from Mobile on January 30, 1849 sailing on the schooner Phenix. Their task was to investigate the Florida coast from just east of Pensacola Bay to Amelia Island with a view to military defense and installations. The final reports of the Board, which were handwritten by Bt. Col. R.E. Lee in March 1849, have fortunately been preserved by the National Archives, as have the instructions to the Board. These documents provide a fascinating snapshot of the state of affairs around the Florida coast between the Second and Third Seminole Wars and well before the start of the Civil War. This article will focus on the Board’s observations with respect to Charlotte Harbor and San Carlos Bay (mouth of the Caloosahatchee).

The March 12, 1849 Report is sub-titled “A list of lands on the coast of Florida recommended to be reserved from sale for the purpose of defense by the Board of Engineers”. The March 14, 1849 Report is a more detailed document providing observations on each of the harbors visited and includes a copy of the initial instructions to the Board dated September 8, 1848.

The observations relating to Charlotte Harbor focus primarily on the various barrier islands and passes which connect the harbor to the gulf and the depths and navigational features of each. The islands and the harbor are described by Bt. Col. R.E. Lee as follows:
“The islands that protect the mouth of the harbour from the sea are low, narrow and sparsely covered by trees of stunted growth. There are besides many others of similar character in the interior of the bay. Several streams empty into this bay and take their rise in Indian Country, and are fed from the overflow of the swamps and lakes. This harbour bordering on the Indian Country has no trade beyond that relating to the Indians and a few fishermen. It would therefore scarcely ever be thought, except by coasters, as a port of refuge.”

The section relating to San Carlos Bay mentions San Ybel Island and Captive Island. The report states that:
“The Caloosa Hatchee river which takes its rise in the swamps around Lake Okee Chobee, discharges its waters into the head of San Carlos Bay. It is navigable for 10 miles from its mouth in boats drawing 4 or 5 feet of water. Punta Rassa, the south point of the Caloosa hatchee is low and sandy and apparently subject to be inundated during severe storms.”

Punta Rassa had in fact been completely swamped in the major hurricanes of both 1841 and 1848.
The conclusions from the Board as summarized in the March 12 & 14, 1849 Reports were that both Charlotte Harbor and San Carlos Bay were of tertiary importance to the defense of the coast but that certain islands should be reserved from sale and development for potential military defense:
“At Charlotte Harbour - 1. Gasparilla Island 2. Boca Grande Island (Cayo Costa) 3. the small islands east of said islands that lie within the distance of one mile.”

Fort Casey was built on Useppa Island in January 1850, not because of the recommendation of the Board of Engineers, but rather on the recommendation of an earlier Board of Officers led by Captain Charles C. Casey who visited the harbor in November 1848 after the destructive hurricane of September which damaged the Kennedy & Darling Trading House (the eventual Burnt Store). Capt. Casey drew the map of the harbor displayed below in January 1849. As an interesting aside, Casey and Lee were classmates at West Point in 1829. In the class of 46 officer candidates, Lee graduated 2nd and Casey was 11th. 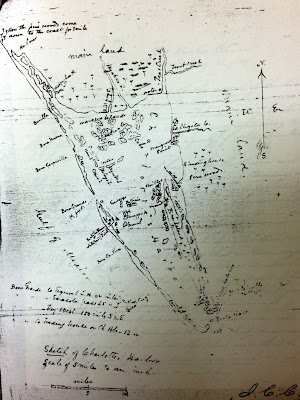 In addition to the formal military correspondence cited above, Robert E. Lee also carried on an active domestic correspondence with his wife Mary Anna Randolph (Custiss) Lee during his assignment to Florida. He sent her five letters between January 28, 1849 and March 8, 1849, all of which have been preserved by the Virginia Historical Society.

It is interesting to speculate on how the Board of Engineer’s findings about the coast of Florida might have benefited General Robert E. Lee twelve years later when he was commanding the Confederate forces which were trying to circumvent the Federal Anaconda Plan blockade of the South.

Guest blogger Graham Segger is the author of Where Do We Live? Research by a Seasonal Resident of Burnt Store Road (aka the Burnt Store Road Book). His book is available at local book stores and also online at www.wheredowelive.com with all proceeds to charity. The material for this blog was first identified while writing that book and was further developed for a February 28, 2019 lecture about Charlotte Harbor Pre-1865 at Florida Gulf Coast University’s Renaissance Academy in Punta Gorda. A copy of the Reports of the Board of Engineers has been provided to the Punta Gorda History Center by Mr. Segger and the map above is from the Vernon Peeples collection preserved at PGHC.
at 9:04 AM 1 comments