How the Railroad Came to Punta Gorda (aka Trabue) 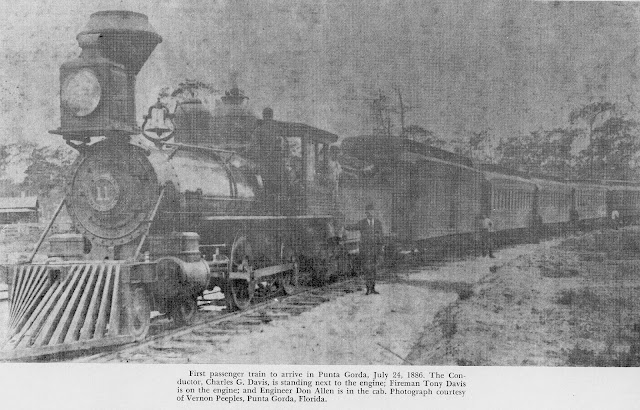 The first railroad to span Florida was completed between Fernandina and Cedar Key in 1861. Coastal vessels navigated between small existing villages and conveyed merchandise to the railroad terminus where it was shipped North or to the Gulf coast.

People living in southwest Florida at the time started making demands for a rail line to this area after the Civil War, and various settlements competed to become the end of that line. In 1866, Charlotte Harbor land owners were working to get the railroad line to terminate there. In 1867, newspapers reported that the terminus for a Gulf coast line site was between Tampa and Charlotte Harbor. Harrison Reed, the governor of Florida. In1868, petitioned Congress for aid to build a railroad to Charlotte Harbor.

By 1880, the South Florida Railroad Company, had completed a line to Orlando and was preparing to extend its line beyond there. Then in May of 1883, the Plant Investment Company, owned by Henry B. Plant, purchased a three-fifths interest in that railroad. The following month Plant, for $50,000, got the right to build a line from Kissimmee to Tampa.

The South Florida Railroad constructed this branch, and the first train entered Tampa over the new line on January 22, 1884. Plant then worked out a settlement with the Florida Southern Railway whereby that company agreed not to build into Tampa but rather down the peninsula to Charlotte Harbor. Plant is said to have had an interest in the Florida Southern; that company and the railroads controlled by Plant never competed with each other.

The Florida Southern Railway had its origins in the Gainesville, Ocala, and Charlotte Harbor Railroad which was chartered in 1879 to build a line from Lake City to Charlotte Harbor with a branch to Palatka. A branch from Palatka to Gainesville was finished first, which was extended to Pemberton's Ferry, and later to Brooksville.

The South Florida Railroad then completed construction on a branch from that point to Bartow. The Florida Southern began surveys south of Bartow Junction, and by May 1885, it was reported that routes had been surveyed to Punta Gorda, Hickory Bluff (aka Charlotte Harbor town), and Pine Island. A month later survey crews under the direction of the South Florida Railroad were in the vicinity of Fort Ogden. Henry Plant is thought to have had a hand in the selection of the terminus.
In August of 1885 the Florida Southern railroad entered into a contract with the Plant Investment company and the South Florida railroad company to build the road from Bartow to Charlotte Harbor, which would be operated jointly.

Isaac Trabue, the founder of Punta Gorda, was very likely  the determining factor in making what was then Trabue the terminus of this rail line.  At the time there was a push for the rail to terminate on the north side of the Harbor at Hickory Bluff.  But Trabue had another vision.  His homesites at his self-named town of Trabue had not been selling well despite other marketing efforts.  He realized that if the railroad ended in his town that would change. Trabue went to Boston to discuss this option with the members of the board of directors of the Florida Southern. On September 6, 1885, he wrote his cousin, then the only resident of the town of Trabue: “If our place is to be the terminus the Yankees will build grand hotels and Trabue will be a city in reality."  Trabue and the railroad directors agreed that if he would deed one-half of his holdings in Trabue to the company, a line would be constructed through his property.

The first Florida Southern train crossed Shell Creek, on May 26, 1886.  Soon after trains were routinely running to Cleveland with connections by stream boat to Fort Myers. The last rail was laid by July 24, and the Charlotte Harbor Division of the Florida Southern was completed to Trabue (Punta Gorda). The first trains arrived in the area in August loaded with building materials for the development of port facilities and other materials for the construction of the Hotel Punta Gorda.

(From the research of Vernon Peeples, as presented to the Florida Historical Society in 1971.)