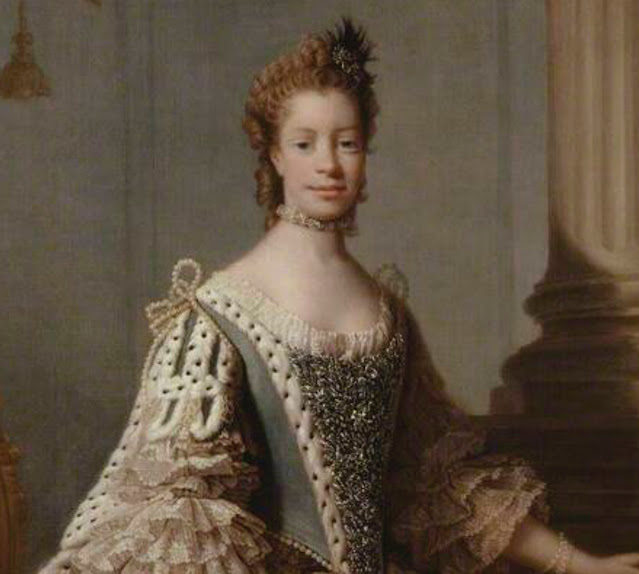 Our large bay has had many names, Bay (Bahia) de Calos, Bay de Carlos,   Bay de Juan Ponce de Leon, but the one that stuck was given to it by a dutch navigator exploring for the British - Charlotte Harbor.  It was in 1775 right before the American Revolution that a British cartographer, Thomas Jeffreys, first put the name “Charlotte Harbour” on a map.  At the time King George III was on the throne and his wife, the Queen, was “Charlotte” Sophia.

Charlotte was born on May 19, 1744. She was the youngest daughter of Duke Charles of Mecklenburg and his wife, Princess Elisabeth of Saxe-Hildburghaussen.  Mecklenburg-Strelitz was small north-German duchy that was a part of the Holy Roman Empire.   When George III became King of England’s he was 22 years old and unmarried. Needing a wife, he sought someone who could bear children and not interfere with the running of the empire.  The 17-year-old Princess Charlotte checked all the boxes partly because she had been brought up in an insignificant north German duchy, and therefore would probably have had no experience or interest in power politics or party intrigues.

When she married George, she spoke only German,  but quickly picked up the King’s language. She bore the first of their fifteen children less than a year after their wedding. She didn’t interfere much in the politics of  Britain, but she did have influence on the King.

Interestingly, as it has been an important element on the shores of her namesake harbor, Charlotte loved music.  A young Mozart performed at her court and she sang an aria and played the flute with him.  He named an opus for her.  She was also an amateur botanist who helped insure that species of plants brought to Britain by explorers were expanded.  The official name of the Bird of Paradise was named for her.

After the onset of his permanent madness in 1811, George III was placed under Charlotte’s guardianship.  She could not bring herself to visit him very often, due to his erratic behavior and occasional violent reactions. While she was popular in her  early years as Queen for her patronage of education for women and care of the sick, during regency to her son, Charles, she met with growing unpopularity.