What we now know as Fishermen’s Village is located on the site of the former Maud Street Dock. The Maud Street City Dock was built in 1928 to replace the King Street Pier, home to the Punta Gorda fishing industry. The old pier had been removed to make way for the new Barron Collier bridge.  At one time there were as many as seven companies that operated the fish packing houses on the Maud Street Dock. Each of the fish companies had a small fleet of “run boats” that made periodic trips down Charlotte Harbor. They transported ice, supplies, and fishermen returning to their fish camps down the bay and brought fresh-caught fish back to the packing houses.  These camps consisted of stilt houses constructed in various locations in the harbor and coves along what is now the Intracoastal waterway.  By the mid-1930s, three packing houses remained: the Punta Gorda Fish Company, the West Coast Fish Company, and the Rose Fishing Company.  The pier was also occupied by the Gulf Oil Company and the Matt Week’s Boat Shop.

In 1939, a fire destroyed the packing plants. John Willis, houseman for the Punta Gorda Fish Company, his wife and their three-year-old son perished in the fire. The West Coast Fish Company folded, but the Punta Gorda Fish Company continued to operate on a much smaller scale. In the mid-1940s, as the fishing industry declined further, a small crab packing plant was built on the pier. Later this plant expanded to include shrimp. 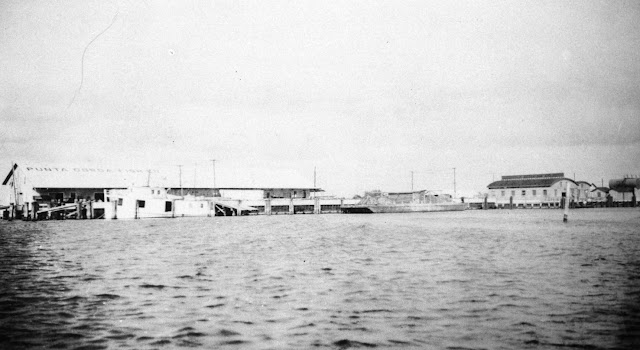 Over time the dock and remaining buildings fell into disrepair, and in 1977, the city council moved to permit its reuse as a shopping and dining attraction. In February of 1980, Fishermen’s Village opened on the original Maud Street Dock site.
at 6:49 AM