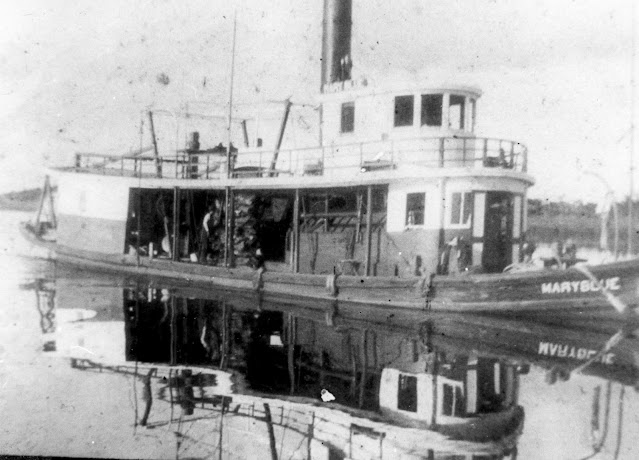 Boats have always been extremely important to the Charlotte Harbor region and were essential to its development.   The ancient Calusa used canoes to get around their domain.   European explorers like Ponce de Leon arrived at Charlotte Harbor by sailing ship.  In the early days of Punta Gorda, between 1886 and 1904, the only means of travel south and west of the town was by boat.
During the winters at the turn of the 20th century, many yachts would be seen anchored near the shores of Punta Gorda.  Naphtha cabin boats like the "Myakka" owned by Charles Dean of  New England brought some of the first "snowbirds" to local waters.  Sharpie sailboats engaged in commercial fishing roamed the harbor. Perry and Marian McAdow, early wealthy residents,  entertained the elite of the town on their sailing schooner, the "Roamer".
Steamboat traffic was heavy during the nascent years of the community.  Paddle-wheelers carrying both freight and passengers navigated the Peace River and carried goods and travelers from Charlotte Harbor to Fort Myers, Cuba, Key West, New Orleans, and Tampa.  Steamboats such as the "Alice Howard" and the "Clara" brought the mail and passengers between Punta Gorda and Fort Myers.  Later the "St. Lucie" and "Thomas A. Edison" were among the ships that made the 76-mile run.  The Morgan Line steamers arrived at Punta Gorda from New Orleans at the Long Dock and left for Key West and Havana the same day.
Before the railroad ran to Boca Grande in 1907, steam tug boats including the "Albert F Dewey" and the "Mary Blue" hauled phosphate on barges down the Peace River to freighters waiting at Punta Gorda and the Boca Grande Pass.
at 1:41 PM