A Yankee Visitor to Charlotte Harbor - 155 Years Ago Today 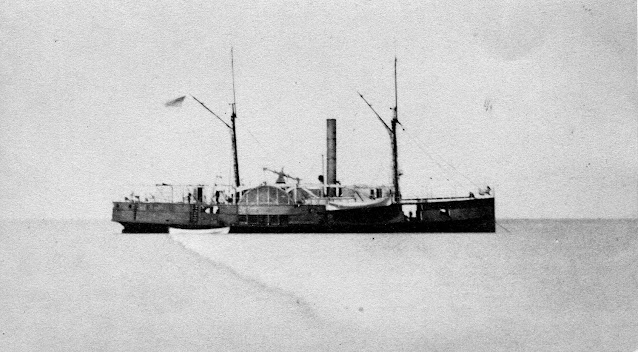 Those of us who enjoy reading and learning about history will, from time to time, encounter a source that pulls together many other diverse events, personalities or facts to make more sense of or shed more light on all of them. This is exactly what happened when I came across the 1865-66 journal of George Franklin Thompson which included a section describing his visit to Charlotte Harbor and the Peace River. The leather-bound volume chronicles, in 124 hand-written pages, a tour of inspection through central and lower Florida including a visit to Fort Ogden from December 31, 1865 to January 2, 1866 (155 years ago this month). The journal was also supplemented by a series of five newspaper articles written by Mr. Thompson for the Tallahassee Sentinel in 1867, though none of the articles touch in any depth on his visit to the Peace River.

Thompson had been appointed to this tour of duty as an Inspector for the Bureau of Refugees, Freedmen, and Abandoned Lands, the federal agency charged with the task of overseeing Reconstruction in a non-slave South. This was a politically sensitive role as Thompson was an unapologetic Yankee and those he encountered in Florida were understandably cautious and just a little suspicious about his motives. While not a carpet-bagger as such, he did carry some baggage in the form of a condescending attitude toward many of the Southerners he encountered.

What makes the journal of most interest to me is Thompson’s account of his meetings with two of the significant personalities in the early history of Southwest Florida. James McKay, Sr. of Tampa and Jacob Summerlin of Polk County were conducting business at the McKay dock in Fort Ogden when Thompson arrived at this outpost located ten miles up the Peace River from Punta Gorda.  Thompson describes in some detail their characters, businesses and politics. Also present was Lt. J.C. Shaw in charge of 39 members of the 99th U.S. Colored Troops. The Fort Ogden dock was built in 1860, primarily to facilitate the shipment of cattle from the Peace River valley and to deliver supplies to the cattlemen entering the area after the close of the Third Seminole War two years earlier. 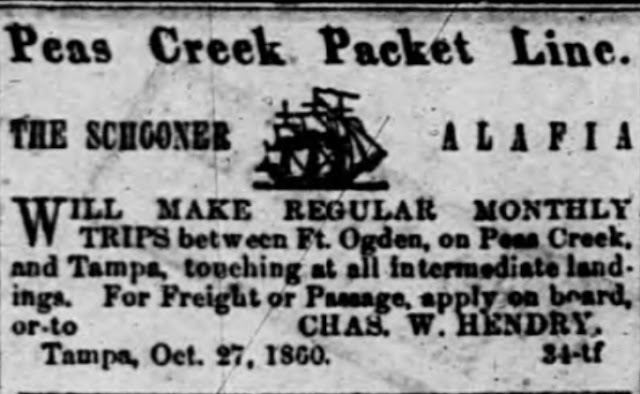 James McKay was a Scottish born ship captain who had arrived in Fort Brooke (Tampa) with his family in 1846 and owned a merchandise store there as well as shipping interests. He had been mayor of Tampa in 1859 and was a leading citizen of that town (both a son and grandson also became mayors of Tampa). During the Civil War he regularly ran the Federal blockade with his ship from Tampa and Fort Ogden and was detained then released in Key West in 1861 and then captured with his ship and imprisoned in Key West in 1863. There is much speculation about his true allegiances after being released again and some have theorized that after 1863 he may have been working covertly for the north. Thompson noted about James McKay that “during the war he however floated with the current into secession and I presume with the defeat of the rebellion glided as gracefully back to Unionism as any man in Florida”.

Jacob Summerlin was the largest cattleman in southern Florida operating from his base in Bartow. George Thompson claimed that Summerlin had 15 to 20,000 head of cattle to draw from. Thompson described Mr. Summerlin as “a man of naturally great will power but devoid of culture in any of the refinements of life.  The poor look up to him as their superior and revere his ideas as law.  Though rough & uncouth in exterior from what we learn of him by others I believe he has a kind heart for quite a number testify that during the war he assisted the families of both refugees and rebels and relieved a great amount of suffering by furnishing bread and meat to them”.  Later in life (1875) Summerlin became the first President of the Orlando City Council and his family name still lives on as a major thoroughfare in Fort Myers leading down toward the cattle dock he built in Punta Rassa. Thompson further reported that “Mr. Summerlin had a party of ten or twelve men with him to herd and load the cattle. They are the poor class in the country & termed "crackers." They were as a class entirely destitute, ignorant and generally ambitious only for enough to eat regardless of quality to satisfy their hunger. They are governed almost exclusively by the cattle proprietors and present a sorry spectacle of what depths of ignorance and stupidity human nature is capable.” Ouch!

Summerlin was a pragmatic businessman who sold cattle to both the Confederates and the Union. He responded to a question about the politics of the locals by saying "I will tell you sir, though they pretend to accept the result [of the war] yet their hatred is just as intense as ever and if an opportunity is offered by a quarrel between France and the United States they would do all they could to break down the government.”

Thompson traveled to the Peace River on a small sailing boat captained by Louis Bell of Tampa. In his journal he recounts an interesting encounter on the night before passing Punta Gorda and arriving at Fort Ogden. “At dusk cast anchor near an island about 7 miles from mouth of Peace Creek. Here we were attacked by Musquitoes at first by Brigade then by Division and afterwards by Corps and doubting our ability to withstand their charges we concluded it would be wiser to retreat. Consequently we fell back about two miles and passed a miserable night in the boat.”

At Fort Ogden Thompson dined onboard James McKay’s steamer the Governor Marvin (formerly the USS Honduras which was active during the Civil War as part of the federal blockade of Florida ports and the May 1864 capture of Tampa).

Thompson reported that McKay was buying cattle from Summerlin for $10-$15 per 350 lb. cow for transportation then sale in Havana for $17-$27 per head. Thompson further described McKay as a “large commanding person of open, frank countenance gentlemanly & kind to everyone he meets.  Full of energy and enterprise he gives to Tampa whatever of life and business it possesses.”

Thompson had this to say about the settlement prospects in the area.  “In this section I think a population would be obliged to depend upon the clouds rather than springs for their fresh water [due to the brackish nature of the water from wells].  We here find plenty of game such as deer, snipes & ducks, & wild turkeys.  The river is well supplied with fish, mullet being the most common”.

After leaving the Peace River Thompson visited the Caloosahatchee River, Fort Myers and two fishing encampments at Punta Rassa and Useppa Island. He did not reserve his negative views to the cattlemen of Florida. On January 7th, 1866 he reached Captiva Island where he camped for the night and had this to say about its prospects “this island is good for nothing except to help hold the world together and afford a resting place for weary travelers.”

Guest blogger Graham Segger is the author of Where Do We Live? Research by a Seasonal Resident of Burnt Store Road (aka the Burnt Store Road Book). His book is available at local book stores and also online at www.wheredowelive.com with all proceeds to charity. The material for this blog was first identified during research for a February 28, 2019 lecture about Charlotte Harbor Pre-1865 at Florida Gulf Coast University’s Renaissance Academy in Punta Gorda. For a summary of Mr. Thompson’s life and the full text of the journal and newspaper articles describing his 1865-1866 visit to Florida see the online transcription by James G. Cusick of the P.K. Yonge Library of Florida History at https://ufdcimages.uflib.ufl.edu/UF/00/09/62/85/00001/GeorgeFThompson.pdf.