The Trabue Plat and Waterfront Parks 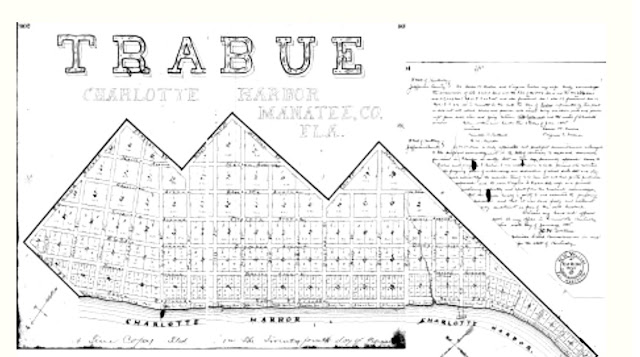 In 1885 Isaac Trabue registered the land that he had purchased and platted in 1884 in Manatee County as the town of "Trabue." In 1887, it would become Punta Gorda.   He named some twenty streets in the new town after relatives, including Retta Esplanade after his sister - Henrietta,  Virginia and Taylor after his wife,  Elizabeth for his mother,  and Marion after another sister.

Despite Trabue's stipulation, over the years attempts were made,  some successful, to commercialize the park land.  Harvey Park, for instance, on which Perry and Marion McAdow received city permission to build their mansion became the site of an inn, later a hotel and restaurant.  But for the most part, the waterfront parks remained as lovely respites along Charlotte Harbor.  In the 1950s some of the parks, from Harvey to Berry Street, were combined and renamed Gilchrist Park.

Thanks to Isaac Trabue and his vision we have the beautiful waterfront parks that we now enjoy.