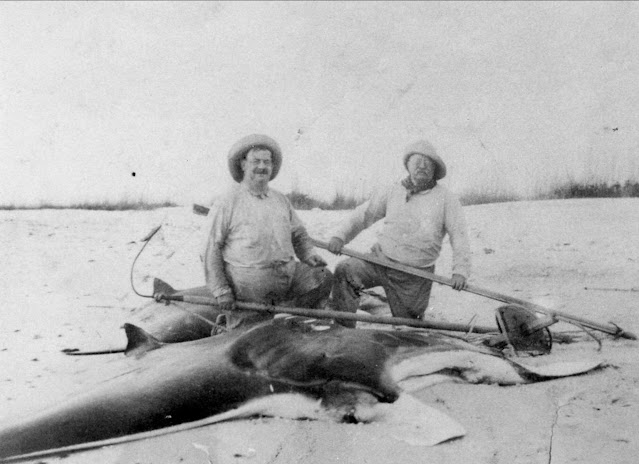 On March 26, 1917, a crowd of over a thousand people gathered to enthusiastically welcome the former President of the United States, Theodore Roosevelt, to Punta Gorda. He had come to conquer the “devil fish.”Roosevelt had been enticed to Punta Gorda through an article written by a fishing guide, Russell Coles of Danville, Virginia, who dramatically described in a magazine the catching of a manta ray weighing three tons. Roosevelt immediately got in touch with Coles - he had to conquer this fish. Coles arranged for Captain Jack J. McCann and crew and the launch, E.C. Knight, to take Roosevelt and himself on a fishing expedition to what was then considered the leading sports fishing area of Florida.
Captain McCann transported the party between Punta Gorda and the inlets and passes of the area.   On their first day, Roosevelt succeeded in harpooning two “devil fish”, one of small size and the other a huge creature measuring over twelve feet across. While here they also explored the surrounding waters, spending one complete day inspecting the bird rookeries near Matlacha.
Roosevelt enjoyed a week of fishing the waters of Charlotte Harbor returning to Punta Gorda on April 2, 1917,  a few days before the United States entered the First World War.
at 7:38 AM