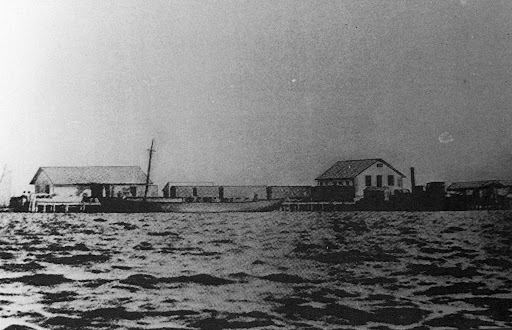 In 1886, after Isaac Trabue persuaded  the Florida Southern Railroad directors to locate their railroad down the east side of the Peace River, track was extended along what is now the linear park to beyond the original town of Trabue.  There a 4200-foot dock was constructed and for the next eleven years, it became the heart of Punta Gorda’s commerce.

The Long Dock, located near where the Isles Yacht Club is today, extended to twelve feet of water which enabled steamships to arrive there.  The pier had a telegraph office, a post office, several fish companies, stores, and facilities. Among the seafood dealers located on the dock were A.K. Demiere, Carnes and Monk, M.M. Sullivan and Sons, and Bloxham and Lewis. In October of 1887, the steamer Hutchinson of the Morgan Line arrived at the Long Dock, and for the next nine years, every Friday Morgan Line Steamers left the dock for New Orleans, and every Saturday for Havana and Key West.

In 1897, Henry Plant purchased the railroad.  To eliminate any competition for Tampa, he had the rails from the Long Dock removed and terminated his railroad near the Hotel Punta Gorda,  where there was only five feet of water.   The era of Punta Gorda as a seaport ended.