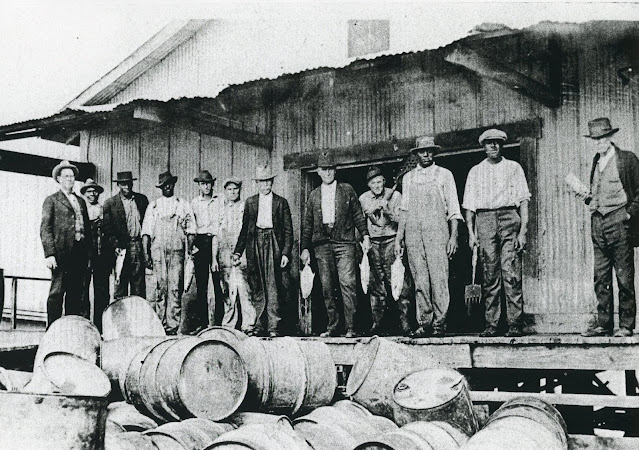 The first Spanish fishermen sailed their smacks into Charlotte Harbor in the 17th century marking the beginning of a commercial fishing industry.  Cuban fishermen controlled the business for over 200 years until the United States took possession of Florida in 1821 and began laying claim to its territorial waters.

In 1886, the railroad arrived at Trabue (Punta Gorda) and an ice factory was built.   By the 1890s, Punta Gorda had one of the largest commercial fishing industries in Florida.  The  businesses first operated from the “Long Dock.”  Then in 1897,  the industry was relocated to the Railroad Dock at the foot of King Street (now U.S. 41 North) and remained there until moved to the Maud Street Dock in 1928.

Fish shacks, built on stilts over the water, served as ice houses as well as bunkhouses. They were serviced by “run boats” carrying fish, ice, and fishermen back and forth.  At its height, the industry caught and processed thousands of tons of fish annually.

Gradually as the commercial fishing industry spread throughout Florida, Punta Gorda’s role in it declined.  The last of the old Punta Gorda fishing businesses - the Punta Gorda Fish Company - ceased operation in 1977.