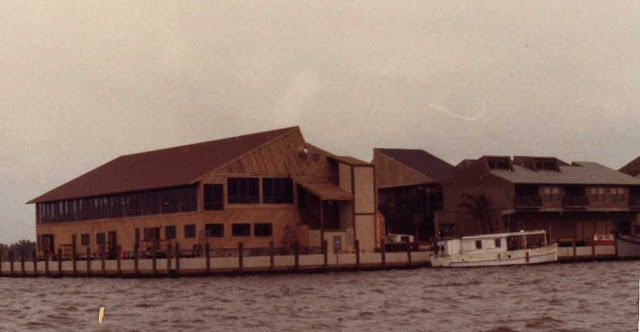 After the last of the old fish companies on the Maud Street Dock, the Punta Gorda Fish Company, ceased operation in the late 1970s, the dock fell into ruin.    Earl Nightingale, a famous radio personality of the day, discovered the rundown pier with its magnificent view of Charlotte Harbor.    He envisioned the end of the dock becoming a perfect setting for a fine dining restaurant.  But when Nightingale partnered with local developer F.M.Donelson and publisher Robert Anderson, a plan was developed that went beyond a dining venue.

The partners created a vision for  a major waterfront tourist attraction that would become Fishermen’s Village.  After many months of planning and negotiating, the team had constructed a complex with shops, restaurants,  apartments, a marina, and  tennis courts.

In keeping with the fishing history, when Fishermen’s Village held its grand opening  in February of 1980, shrimp boats and mullet fishermen could still be seen at the edge of the facility. Pleasure and fishing cruises were also part of the early activity,  as they are today, adding to the atmosphere of the colorful fishing and boating history of days gone by.